President Barack Obama speaks in the East Room of the White House in Washington, Jan. 30, 2015.
Carolyn Kaster—AP
By Maya Rhodan

President Obama urged Congressional Republicans to stand down from a looming fight over Department of Homeland Security spending tied to the hot-button issue of illegal immigration.

Congress has until the end of this month to approve this year’s funding for the agency, the only one not included in a budget deal passed late last year. But some Hill Republicans hope to use the spending bill to try to undo Obama’s decision to defer deportations for millions who came to the U.S. illegally.

In a speech unveiling his FY 2016 budget at the Department of Homeland Security Monday, he noted that over 100,000 employees would have to show up to work if a spending bill is not passed by the Feb. 27 deadline, but they would not be paid.

“Don’t jeopardize national security over this disagreement,” he said.

The department was excluded from a long-term appropriations package passed late last year, but a House bill passed in January would provide $40 billion to the department through September. That bill, however, includes language that would block Obama’s executive actions and restart deportations for people covered by Obama’s executive actions. The President has already threatened to veto the bill, which would lead to a partial shutdown.

Obama noted a comment from a Congressional Republican who last week said it “wouldn’t be the end of the world” if a spending bill were not to pass before the deadline, saying “I guess literally that’s true, but until they pass a funding bill that’s the end of a paycheck of tens of thousands of frontline workers.”

If the spending bill is not passed, DHS employees in critical security positions would likely still report to work. During the 2013 government shutdown, over 80% of key employees reported for duty when many federal employees were furloughed.

White House officials say about 147,000 front-line employees, including TSA agents, Customs and Border Patrol Officers, Secret Service agents and members of the Coast Guard would be forced to work without pay if funding were to expire.

The Senate is set to take up the House bill on Tuesday. “The House-passed bill we’ll consider would do two things: fund the Department of Homeland Security, and rein-in executive overreach,” Sen. Majority Leader Mitch McConnell said Friday. “There’s no reason for Democrats to block it.”

But Senate Democrats are poised to do just that. In several interviews, Sen. Dick Durbin (D-Ill.), the Senate Minority Whip, has made it clear that Senate Democrats plan to vote against the House version of the bill, which would make it impossible for it to get the 60 votes it would need to advance. Roll Call reported last Thursday that House Majority Leader Kevin McCarthy issued a memo noting that if the Senate fails to pass their bill Republicans “will be discussing with the Conference the best way to continue to challenge the President’s unconstitutional amnesty.”

“It is imperative that we ensure that DHS is ready, willing and able to protect the American people,” Secretaries Tom Ridge, Michael Chertoff and Janet Napolitano said in the letter, first reported by the Washington Post. “To that end, we urge you not to risk funding for the operations that protect every American and to pass a clean DHS funding bill.”

Obama said Monday, “We need to fund the department, pure and simple.” 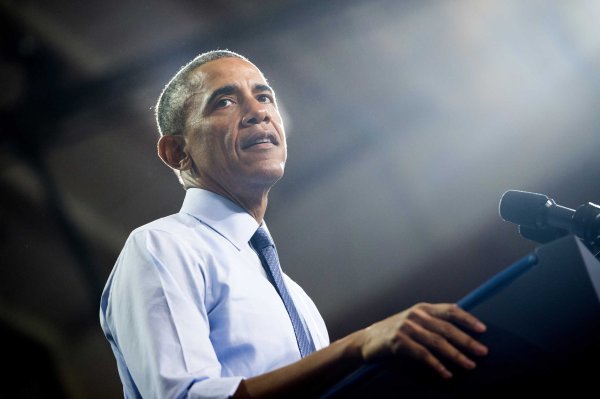 The Real Audience for Obama's Latest Budget Plan
Next Up: Editor's Pick