The First Ever Large-Scale Ebola Vaccine Trial Begins in Liberia

Health workers take the temperature of a boy who came in contact with a woman who died of Ebola virus in the Paynesville neighborhood of Monrovia, Liberia, Jan. 21, 2015
James Giahyue—Reuters
By Helen Regan

Liberia has commenced the first large-scale trials of an experimental Ebola vaccine.

Scientists aim to immunize around 30,000 volunteers and health care workers in the country starting Monday, the BBC reports. The trial will involve injecting each of them with a tiny amount of chimpanzee cold virus that carries safe genetic material of Ebola, tricking the human body into producing an immune response.

The medicine has been hidden in a secret location in the country since it arrived one week ago.

British pharmaceutical and healthcare company GlaxoSmithKline developed the vaccine alongside the U.S. National Institutes of Health; should the trial be successful, it would be the first preventative vaccine against the killer virus.

More than 8,500 people have died during the current Ebola outbreak, with 3,600 succumbing to the disease in Liberia alone. The number of new Ebola cases is in steady decline, however. 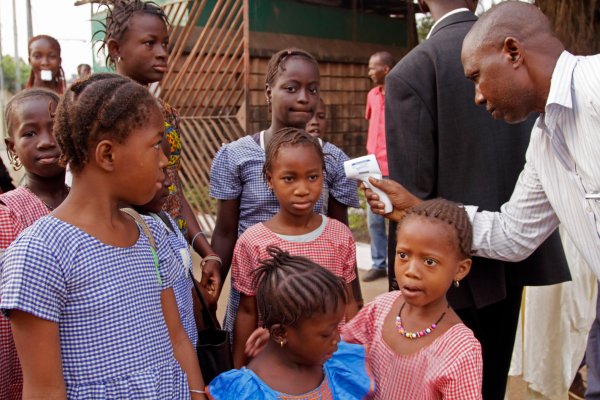 The Ebola Virus Is Mutating, Say Scientists
Next Up: Editor's Pick