The New England Patriots lost their past two Super Bowl trips in heartbreaking fashion, with the Giants using David Tyree’s helmet-aided grab to spoil a potential 19-0 campaign and then a Hail Mary attempt falling shy against that same Giants team a few years later.

They flipped the script this time, ripping out the Seahawks‘ hearts with a dramatic 28-24 win that required both a late touchdown drive and a goal-line interception by Malcolm Butler.

Three thoughts on the Patriots’ win, with plenty more coverage to come:

1. An instant classic closes a tough season: The storylines during Super Bowl week included “Deflategate” and Marshawn Lynch blowing off reporters. And that was an improvement from the actual season itself, when domestic violence and player safety led the list of woes for a league under more scrutiny than perhaps ever before. Many of the issues will linger into the offseason, requiring commissioner Roger Goodell to come up with some answers.

Sunday night, though, the NFL gave its fans a thrilling, heart-in-your-throat championship game. It was the defending champs vs. one of the most successful franchises in recent history. On paper, it had the look of a game to remember.

The Patriots and Seahawks certainly did not disappoint.

A defensive struggle early gave way to a back-and-forth affair over the final 35 minutes or so, as the two teams traded haymakers. At one point, Seattle scored 17 straight, shoving New England to the ropes. Like champions are wont to do, the Patriots responded.

Perhaps not since Tennessee’s Kevin Dyson came up one yard short in Super Bowl XXXIV has the title game ended in comparable fashion. (Those Adam Vinatieri game-winning field goals were close, just not quite on this level.)

We’ll be talking about this one forever.

2. Tom Brady and the Patriots’ passing attack: There were but a handful of times on his 50 pass attempts that Brady did not play it relatively safe. The Patriots came out in the first quarter content to grind the clock, to nickle-and-dime their way down the field while keeping Seattle’s offense corralled on the sideline.

Two of his riskier plays resulted in interceptions: a back-footed, ill-advised toss that Jeremy Lane picked at the goal line and a toss into a tight window over the middle on which Bobby Wagner made a brilliant defensive play.

But Brady and the Patriots’ passing attack kept plugging away, even in the face of a 10-point deficit. A short toss to Julian Edelman; Shane Vereen out of the backfield; a quick crossing route by Rob Gronkowski. His two longest completions were a 23-yarder (Edelman) and a 22-yard touchdown pass over the top to Gronkowski.

Everything else, save for an incompletion here or there, was underneath or wide. The clear plan was to push the Seahawks horizontally as opposed to downfield, where the likes of Richard Sherman and Earl Thomas lurk.

The Seattle defensive line threatened to unhinge the Patriots’ work, thanks mainly to Michael Bennett. He was a man amongst boys up front, constantly pushing Brady from his comfort zone during the second and third quarters. When the offense was rolling, though, Brady was able to get the ball out before the pass rush got home.

It worked just enough, as the Patriots pulled off the biggest second-half comeback in Super Bowl history. Brady (37-of-50 with four touchdowns) took home the MVP.

3. Chris Matthews emerges: He was the 2012 CFL Rookie of the Year. He recovered the onside kick that turned Seattle’s NFC title-game comeback into reality. And now, Chris Matthews, he of zero career NFL catches prior to Sunday, is a Super Bowl star.

Matthews did not even make his way to Seattle’s 53-man active roster until early December, after linebacker Kevin Pierre-Louis landed on injured reserve. When it happened, team reporter Claire Farnsworth wrote on the Seahawks’ website that “6-foot-5, 218-pound Matthews possesses something the others don’t: his size, the kind of size that coach Pete Carroll likes at the split-end position and also a bigger target in the red zone.”

True, but no one had seen Matthews put that edge to work — other than in getting up and grabbing the loose onside kick vs. Green Bay — prior to Sunday’s shocking breakthrough.

“We brought a guy up named Chris Matthews, who’s done a phenomenal job,” said Seattle QB Russell Wilson this week, speaking about the options his team had in the passing game. “There’s so many different guys I can get the football to.”

Matthews finished the game with four catches for 109 yards, and his first two grabs allowed the Seahawks to get to halftime tied at 14, despite being outplayed for much of the opening two quarters. He set up Marshawn Lynch’s touchdown with a remarkable 45-yard grab despite tough one-on-one coverage by 5-11 Kyle Arrington. Later, with just two seconds left on the clock, Matthews snatched a back-shoulder throw for a score.

Wilson kept looking Matthews’ way in the second half, finding him deep again on the third quarter’s opening drive. That grab forced the Patriots to adjust their coverage — they moved the bigger, more physical Brandon Browner over on Matthews. Call that matchup a Patriots’ win: Matthews had a catch early, but Browner broke up a deep ball for Brady.

The Seahawks’ offense was stagnant until Matthews delivered a jumpstart. This has been the MO for their receivers and tight ends this year: nothing flashy on paper, but plenty of production when it was needed.

Matthews simply added his name to the list at the most opportune time. 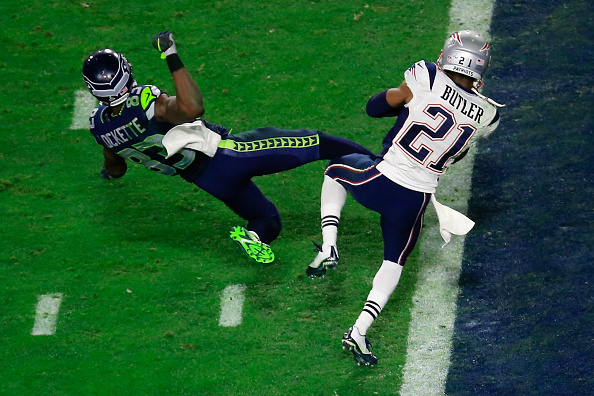