Tom Brady celebrates with the Vince Lombardi Trophy after defeating the Seattle Seahawks to win Super Bowl XLIX at University of Phoenix Stadium in Glendale, Ariz., on Feb. 1, 2015
Elsa—Getty Images
By Sports Illustrated

The Seahawks appeared poised to take the lead late in the fourth quarter after quarterback Russell Wilson completed a long pass to Jermaine Kearse. Seattle turned the ball over two plays later when Wilson was intercepted by Malcolm Butler on the one yard line.

The win marks the fourth Super Bowl victory for quarterback Tom Brady, who was named the game’s Most Valuable Player after completing 37 of his 50 pass attempts for 328 yards and four touchdowns.

Wide receiver Julian Edelman recorded a game-high nine receptions for 109 yards. He scored the go-ahead touchdown with just over two minutes remaining in the fourth quarter. 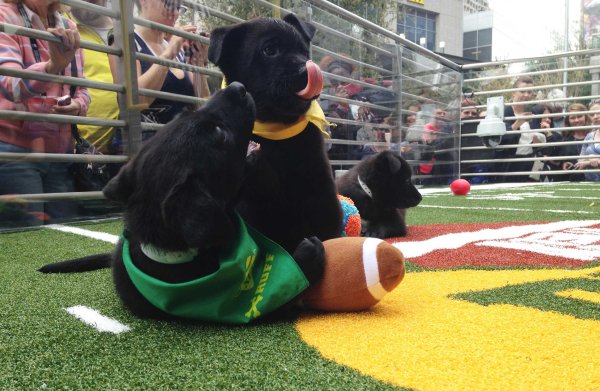 Behind the Scenes of the Puppy Bowl
Next Up: Editor's Pick