First things first. There was the food.

As the game kicked off, Seattle’s most famous rapper made it clear where he stood.

But even Mackelmore didn’t get the VIP treatment like Steven Tyler.

After the two teams traded punches and ended the first half tied 14-14, Donnie Walberg came through with epic analysis.

And of course, the Katy Perry’s Halftime performance created just as much of a stir as the game itself. Neil Patrick Harris approved…sort of.

So did Anderson Cooper.

R&B singer Anthony Hamilton thought there was another star of the show.

While Snoop Dogg claimed he was actually a guest performer.

But back to the game: Seattle wide receiver Chris Matthews was the surprise star of the Super Bowl.

A journalist for the Charlotte Observer voiced what we were all thinking.

Rapper Gucci Mane knew the reason Seattle was pulling away in the 3rd quarter.

And naturally the ‘deflategate’ jokes were aplenty.

But the Patriots didn’t give up, and a 4th quarter touchdown by Tom Brady made the game interesting, in both English and Spanish.

That touchdown was also a huge milestone for Tom Brady—setting the all-time record for most career touchdown passes in the Super Bowl.

Along the way Brady set another record.

Jermaine Kearse’s unbelievable catch. Seattle is driving for the win!

And the decision to throw the ball instead of running it will be questioned for years.

The New England Patriots are your Super Bowl XLIX Champions!

Tom Brady was the MVP of Super Bowl XLIX.

And the White House issued their congratulations.

See you next year! 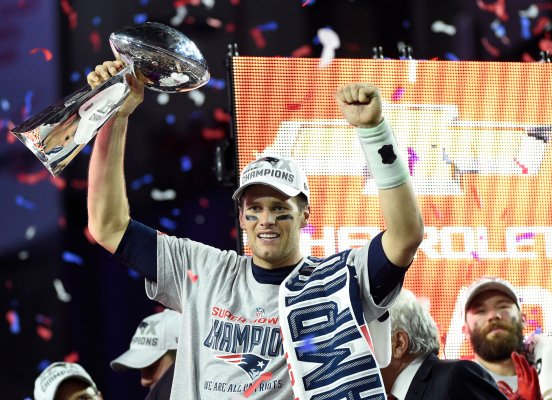