This photo taken April 14, 2014 shows one section of the $500 million I-75 Phase II modernization project in Dayton, Ohio.
Skip Peterson—AP
By Maya Rhodan

President Obama will propose a one-time tax on foreign profits held by U.S. corporations to pay for an ambitious plan to fix roads and bridges across the country.

The plan is included in the proposed $4 trillion budget that Obama will send to the Republican-held Congress Monday. Like other parts of the budget, it is not likely to pass, but is intended more to frame the debate with Capitol Hill over how to spend taxpayer dollars.

Obama’s proposal is a one-time mandatory 14% tax on the $2 trillion in earnings that corporations currently have overseas. In the future, the government would impose a 19% tax on such earnings. The tax would fund about half of a $478 billion six-year plan to upgrade transportation infrastructure, with the rest coming from the existing Highway Trust Fund.

Currently, U.S. companies only pay taxes on money they make overseas once they bring that back to the U.S., which causes many to simply park their money outside the country.

White House officials gave some credit for the plan to a retired Republican lawmaker, former House Ways and Means Committee Chairman Dave Camp, who proposed taxing foreign earnings last year in order to fix roads, though at a much lower rate than Obama is putting forward. A separate bipartisan proposal would allow companies to voluntarily pay taxes on overseas earnings, but officials said the president opposes that plan.

Over the past several years, American investment in infrastructure has been significantly lower in scale and scope than many countries across the globe. The American Society of Civil Engineers has given the U.S. an overall grade of D between 1998 and 2013 in its reports on the state of America’s overall infrastructure.

Overall, the proposed budget piggybacks off of the middle-class economic policies outlined in the President’s State of the Union Address and includes proposals White House officials say would result in $277 billion worth of middle class tax cuts. It also includes a wide range of investments in education and job skills, including Obama’s plan to provide two years of free community college to some students.

Under the proposed budget, the overall deficit figure is $474 billion, or 2.5% of the gross domestic product, and White House officials say the budget would reduce the deficit by $1.8 trillion over the next ten years. 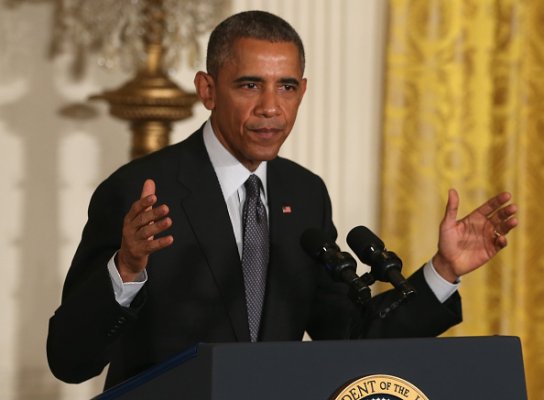 Obama Admits to Being Shaken, Emboldened by ISIS Beheading Videos
Next Up: Editor's Pick