Hostage Crisis Deepens Debate Over How to Defend Japan

Japanese Prime Minister Shinzo Abe talks during a ministerial meeting on an online video purportedly showing a Japanese hostage being killed by the Islamic State at the prime minister's official residence in Tokyo on Feb. 1, 2015.
Kimimasa Mayama—AFP/Getty Images
By Kirk Spitzer / Tokyo

The presumed deaths in Syria of a gentle children’s advocate and a troubled adventurer bring to a close a crisis that riveted Japan and brought much of the Japanese government to a standstill for more than a week.

But the fallout from the crisis could be far-reaching.

Japan already was facing a polarizing national debate over Prime Minister Shinzo Abe’s ambitious security agenda. And the hostage crisis — which ended Saturday with video of an execution at the hands of the Islamic State of Iraq and Greater Syria (ISIS) — seems likely to weaken support among the public, while hardening attitudes among government leaders.

“Initially, there will be a boost for Abe as people rally around the flag. But down the road, he faces tougher questions,” says Jeff Kingston, director of Asian Studies at Temple University’s Tokyo campus. “The public is still digesting the horrific events, but certainly there are doubts that Abe’s security agenda is making Japan safer.”

Since taking office for a second time 25 months ago, Abe has worked to boost defense spending, ease restraints on Japan’s military and develop a more assertive foreign policy. At least some of that agenda is in response to China’s rapidly growing military and aggressive territorial claims.

But Abe’s program of “proactive contributions to peace” failed badly during his six-day visit to the Middle East last month. Islamist extremists accused Abe of taking sides in the grisly conflict in Syria and Iraq by pledging $200 million in aid to countries opposing ISIS.

ISIS threatened to kill two Japanese men taken hostage earlier unless Abe met their demands, which initially called for a ransom equal to the aid package that Abe announced in a high-profile speech in Cairo.

The killers apparently followed through on those threats, releasing videos that purportedly show the murders of Haruna Yukawa, 42, a failed businessman and would-be private military contractor, and Kenji Goto, 47, a respected freelance journalist who chronicled the suffering of children in war zones around the world.

Goto was kidnapped after entering Syria in October in a failed attempt to aid Yukawa, whom he described as a friend. Yukawa had been taken hostage while traveling with a Syrian rebel group in August.

Abe has argued that Japan, as a democratic nation and a major economic power, has a “responsibility” to play a more active role in world affairs. But the hostage crisis is likely to weaken public support for that view, says Brad Glosserman, executive director of the Pacific Forum CSIS in Honolulu.

“There has always been a powerful ‘disengagement mentality’ in postwar Japanese thinking, and I worry that [the hostage crisis] will reinforce that,” Glosserman says. “It will feed the popular inclination to stay out of entangling affairs.”

Even before the hostage crisis, Japan was being forced to do some hard thinking about its place in the world. This year marks the 70th anniversary of the end of World War II. Abe, who has strong nationalist leanings, already had begun the contentious process of writing an official commemoration statement that critics worry will backtrack on previous apologies.

In a meeting with international reporters in Tokyo on Friday, the U.S. State Department’s fourth-highest-ranking official, Under Secretary for Political Affairs Wendy Sherman, pointedly said that the U.S. expects Abe’s statement to “promote reconciliation.”

Abe is expected to submit legislation to Japan’s parliament this spring that would allow the country’s military to fight alongside the U.S. and other friendly forces under circumstances currently forbidden by Japan’s pacifist, postwar constitution.

The hostage crisis revealed that even if Japanese law had permitted it, Japan’s military lacked the hardware, training or organization to attempt a rescue halfway around the world (though in truth, few countries have such capabilities). The lonely deaths of Yukawa and Goto might change that, says Grant Newsham, senior research fellow at the Tokyo-based Japan Forum for Strategic Studies.

“They could make some practical improvements in capabilities, but most importantly they could become psychologically willing to operate overseas and with a range of partners and allies,” says Newsham, a former Marine Corps liaison with the Japan Ground Self Defense Force. “The psychological aspect is key. Overcome that hurdle and Japan starts to look and act like a regular country.”

The hostage crisis is certain to deepen the debate over what kind of country Japan wants to be, says Nancy Snow, a visiting research professor and specialist in international affairs at Keio University in Tokyo.

“This is not a passing event,” says Snow. “The lesson for Japan is that no one is immune anywhere from the troubles of the world.” 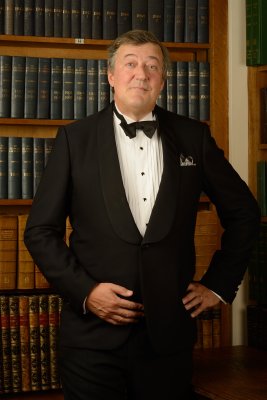 Stephen Fry Says He'd Be Ready to 'Confront' God
Next Up: Editor's Pick