Remember checking in to places on Foursquare? Of course you do. At the peak of its hype around 2012, the app boasted more than 20 million users and billions of check-ins. Everyone with an iPhone seemed to be using it to let their friends know what they were up to. You may have even been “mayor” of the brunch spot down the street or the rooftop bar downtown.

Though the check-in’s popularity has cooled, the company’s excitable co-founder and CEO Dennis Crowley is pushing ahead in the app’s bustling Manhattan headquarters, figuring out new ways to make money off its wealth of search data. Foursquare claims 55 million users worldwide, with a recent split in the app’s functions attracting a new generation of users.

Crowley, 38, sat down with TIME this week to talk about his long road from broke snowboarding instructor to chief of a multi-million dollar venture. Along the way, Crowley nurtured his addiction to connecting friends with hip places by constantly updating Foursquare’s early progenitor, Dodgeball, an app he first built in 2000. He told us about the ups and downs of entrepreneurship and continuing on even when a Palm Pilot startup lays you off and Google drops your pet project.

On building rickety websites in the 1990s

I was never able to take computer science or engineering classes, because I just wasn’t good enough at math to get into them. But I was able to put together these very basic static websites. I learned a lot of it just out of a book, a learn-to-make-a-website-in 30-days book.

In college, I’d go, “hey, we were at this party,” and I would take the pictures and put them online and write stories and send them to my friends that went to college elsewhere. Like, “Hey, this is what I did this weekend, isn’t it cool? It’s like a photo book, I’m sharing it!” It took me four hours to scan all these photos I took with a disposable camera and it cost me $20 to develop the film. But I was really into that.

On working at a cool Palm Pilot startup

I love this idea of making city guides: you make a piece of software, and it changes what people do when they leave work. You have your phone it tells you where to go and you can just make plans on the fly. [Startup] Vindigo was doing it for Palm Pilots. I was super excited about working there. They were building this stuff doing it across multiple cities and they were trying to generate advertising off of it.

This was around 2000 or so in New York. I would go to these bars on the Lower East Side [of Manhattan] and you would see people using Vindigo, with the Palm Pilot screen as this blue color, and you’d be like, “those guys are using the app that I made during the day.” And I got totally hooked on this, you can make things during the day and see people use them at night. That was my calling.

I turned 25, got laid off from Vindigo, and broke up with my girlfriend. It was the worst week ever. There were no other jobs to be had. I holed myself up in my apartment and we didn’t have anything to do.

We turned my Dodgeball service that we had, and I added this feature so you could say, “Hey, I’m here. Hey, I, Dennis, am here.” You have five friends on the service and it would send an email to everyone’s phone and everyone’s phone would ring, and because we don’t have jobs and we don’t have anything to do during the day, and everyone got the message at the same time.

On going to grad school—because robots

On turning his grad school thesis into a Google acquisition

At NYU, we had to come up with a thesis project and [my friend] Alex Rainert said, “hey, why don’t you take that Dodgeball thing and dust it off now that Friendster is a thing?” We made it look a little like Friendster and tightened it up on mobile, and we learned a lot about geocoding and GPS. We launched it in 2004 for five cities. And it started getting some press.

I went out to San Francisco to speak at a conference. My friend there was like, “oh sh*t, I’m sorry I didn’t pick you up at the airport. Can you come to Google instead and just meet me here for lunch?” And then I went to Google and it was like, “just don’t tell anyone that you’re here, go hide behind the desk.” And people found out, “oh, one of the guys from Dodgeball is here,” and they said “hey, can you tell us how it works?”

And I spoke to one person, then two people and there were 10 people and eventually I went to this conversation when they basically said, “hey, you guys are doing some pretty cool stuff, we don’t really invest in companies but you guys should come and work here.”

And that’s how Dodgeball ended up getting acquired by Google. It was super, super serendipitous.

On reinventing Dodgeball as Foursquare in 2009 after quitting Google

We’re at a bar for my buddy’s birthday party, and someone read on their phone that, hey, Google just announced that they’re going to shut down the following three projects: Notebook, something else, and Dodgeball. And I’m like, “wait, they’re going to shut down Dodgeball? It’s still running!” Dodgeball was the reason half of the people ended up at that birthday. That’s how everyone in New York coordinated, all my friends.

And [my programmer friend] Naveen Selvadurai and I said, “If they’re going to turn it off, we’re going to build another one!” This was at the bar. And everyone was like, “Yeah! Build!” We’d sit around my kitchen table and just work 18 hours a day. Every day until the thing started getting a little stronger, and we launched in a couple other cities and it started getting some momentum.

[Venture capitalist] Charlie O’Donnell wrote this blog post, “I’ve seen the future of Yelp and it’s called Foursquare.” And it was like, people will check into this thing. Merchants want the check-ins, merchants give discounts, this company will generate money, and more people will check in. I read that and I thought, “This seems like a pretty good idea. That’s the story we should tell the investors.” That’s what we started doing.

We ended up raising some money from Union Square Ventures. And me and Naveen, we got our first $1,000 paycheck from Foursquare. Suddenly we had a three-person team, and we just started growing from there . . . and now here we are, five years later. 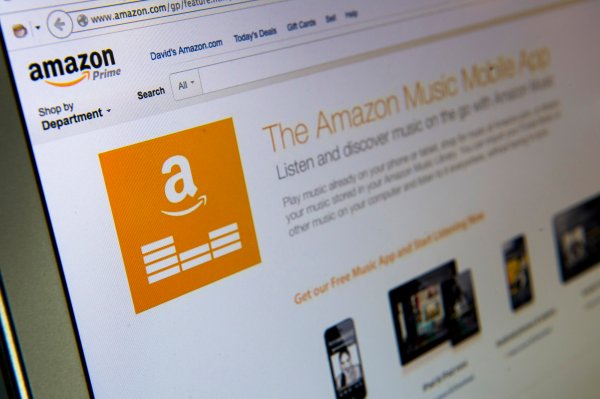 We'll Soon Know More About Amazon's Cloud Business Than Ever Before
Next Up: Editor's Pick