The rebel leader in South Sudan’s yearlong civil war says he’s hopeful peace talks with the government will continue later this month, extending negotiations that could be the country’s last chance at long-term stability.

Rebel leader Riek Machar, the former vice president, agreed early Monday on a roadmap for forming a transitional government after five days of negotiations with President Salva Kiir in Addis Ababa, the Ethiopian capital, on the sidelines of the African Summit. The talks were brokered by envoys from the group of East African nations known as the Intergovernmental Authority on Development (IGAD).

“We hope to continue discussions on the contentious issues on the 20th of February,” Machar told TIME in a phone interview on Monday, adding that both parties agreed to respect a ceasefire until then. “We will go and consult with all the constituencies.”

Fighting first began in Juba, the capital, in December 2013, as Kiir accused his former vice-president of orchestrating a coup. Violence rapidly spiraled into a national conflict along both political and tribal lines, and has continued ever since.

Both Machar and Kiir agreed to finalize an agreement by the end of March and establish a transitional government by July 9. But key issues, including the power of the presidency and the two deputies, remain unresolved, and it’s unclear if the two parties will be able to overcome their differences.

Machar described negotiations that began on Thursday and continued on and off until early Monday morning as cordial. “We laugh, we joke,” he said of his interactions with Kiir, a one-time ally, but accused government forces of breaking past ceasefires. This time, he said, “I hope it will be different.”

But experts say that’s unlikely to be the case, with at least six ceasefires broken by both sides over the past year. “I doubt that this agreement has really put us on path toward a solution to this conflict,” said David Abramowitz, vice president for policy at Humanity United. Extending the negotiations could be a way for both parties to “position themselves on the battlefield,” according to Abramowitz.

Still, observers say that if a peace deal is not reached soon, the fledgling country that split off from its northern neighbor in 2011 could be permanently fractured. “This is the moment of truth for South Sudan,” said Eric Reeves, an English professor at Smith College and an expert on Sudan and South Sudan, speaking as the negotiations were taking place.

The war’s toll on the country has been devastating. Since the fighting began, at least 10,000 people have been killed and nearly 2 million others displaced. While a massive international assistance effort led by the United Nations and other NGOs helped avert a feared famine this past year, ongoing fighting could disrupt the planting season in the spring and lead to widespread food shortages.

The East African countries heading up negotiations have threatened sanctions or even military intervention. But the group has been hobbled in part by ties between the warring parties and member countries, which include countries like Sudan and Uganda that have long-standing interests in South Sudan. This is now the “last chance” for South Sudan’s East African neighbors to broker peace, Abramowitz said. “If they fail, then others need to get engaged. And the signs are not good.”

Those others would include Western governments and the African Union (AU), which on Saturday threatened to impose sanctions on the warring parties in South Sudan. The United States, which played a key role in ending the Sudanese civil war in 2005 before the North and South split, has been slow to decide whether to push for an international arms embargo on the country amid internal debate in Washington.

Machar said he was open to an arms embargo, which some fear could have a disproportionate impact on the supply of arms to Kiir’s government, but he criticized sanctions as “misguided.”

“Sanctions do not create peace,” he said. “Those who want to make sanctions, they should help us reach an agreement instead of making sanctions.”

Hanging over the negotiations is a report drafted by an AU commission that is expected to identify those responsible for some of the atrocities that have been committed during the conflict. On Friday, Chairwoman of the Commission Nkosazana Dlamini-Zuma said it would postpone the report’s release, despite calls from human rights groups to publish it in order to help establish accountability in the conflict.

“One of the reasons that we are where we are today is that past human rights abuses were not addressed by the political elites in South Sudan, and these challenges have been festering over years and years,” said Abramowitz. “We can’t allow them to do that again.” 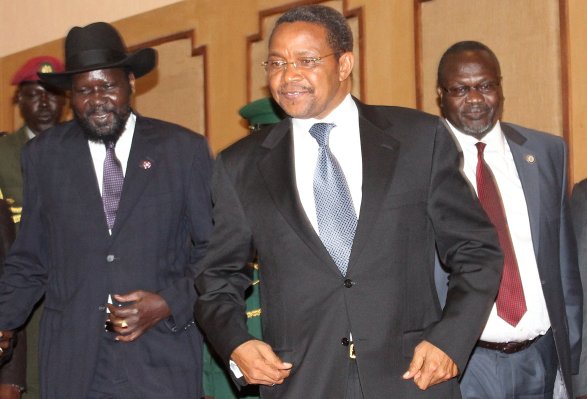