Former Massachusetts Gov. Mitt Romney told donors and supporters Friday that he will not run for president, just three weeks after upending the GOP field by suggesting he was seriously considering a third bid for the White House.

“After putting considerable thought into making another run for president, I’ve decided it is best to give other leaders in the party the opportunity to become our next nominee,” Romney told donors, in remarks that were first published by conservative radio host Hugh Hewitt and confirmed by a Romney aide.

Late Thursday, Romney invited donors and supporters to a conference call to announce his plans. “Please join me for an update call tomorrow at 11:00 AM EST / 8:00 AM PST,” Romney’s political team wrote in an email, signed “All the best, Mitt.”

Romney told those on the call that he is confident he could once again win the Republican nomination. But he also acknowledged, “it would have been difficult test and a hard fight.” He added hat he believes that another Republican would best be able to challenge likely Democratic nominee former Secretary of State Hillary Clinton.

“I believe that one of our next generation of Republican leaders, one who may not be as well known as I am today, one who has not yet taken their message across the country, one who is just getting started, may well emerge as being better able to defeat the Democrat nominee,” he said. “In fact, I expect and hope that to be the case.”

“You can’t imagine how hard it is for Ann and me to step aside, especially knowing of your support and the support of so many people across the country,” he said. “But we believe it is for the best of the Party and the nation.”

Romney, who met privately in Utah last week with former Florida Gov. Jeb Bush, is not expected to endorse a candidate in the already crowded GOP field.

On the call Romney said it was “unlikely” he would reconsider his decision to step aside, and freed his donors and supporters to work for other candidates. “Please feel free to sign up on a campaign for a person who you believe may become our best nominee,” Romney said. Many Romney aides and donors had already sought out work with other contenders. Just Thursday, David Kochel, Romney’s Iowa strategist, signed on with Jeb Bush’s campaign.

He delivered the prepared statement in an even tone on a four-minute call with supporters and donors, ending his remarks with the words “Bye bye.” An aide said Romney wrote the remarks, in which he thanked supporters for their patriotism, himself.

In a statement following the call, Bush praised Romney as a “patriot” and a leader of the GOP. “Though I’m sure today’s decision was not easy, I know that Mitt Romney will never stop advocating for renewing America’s promise through upward mobility, encouraging free enterprise and strengthening our national defense,” he said. “Mitt is a patriot and I join many in hoping his days of serving our nation and our party are not over. I look forward to working with him to ensure all Americans have a chance to rise up.” 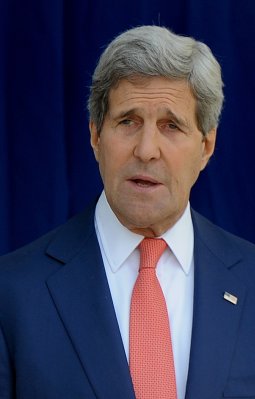 John Kerry Is in Trouble for Not Shoveling His Snow
Next Up: Editor's Pick