Getty Images
Ideas
By Kareem Abdul-Jabbar
Abdul-Jabbar is a six-time NBA champion and league Most Valuable Player. He is the author of the new book, Writings on the Wall.

Imagine a neighborhood where dozens of women were violently assaulted on a continuing basis. And that the local police chose not to bother investigating 40 percent of assault victims’ complaints. Would you continue to live in that neighborhood? Probably not. Especially if you had children.

This year American parents will be sending about 12 million of their 18- to 24-year-old daughters to attend colleges and universities. Instead of the ivy-covered walls, Homecoming bonfires, administrative support, and lifelong friendships we’d hoped for them, we’ll be sending many of them toward groping hands, drug-laced drinks, administrative indifference, and lifelong trauma. Witness the conviction this week of two former football players at Vanderbilt University for perpetrating and videotaping the rape of a fellow student.

Fortunately, California has recently enacted legislation that may reduce the number of sexual assaults and make it easier to prosecute offenders. Popularly known as a Yes-Means-Yes law, it obliges those engaging in sexual activity to first give “affirmative consent.” That means they have to specifically say “yes” before any sexual contact. This is an improvement over the previous No-Means-No protocol, because sexual aggressors could claim a woman didn’t say no to their advances, even though the woman might have been incapacitated through drink, drugs (whether self-administered or given to her without her knowledge), or fear of violent behavior from the male. Apparently, some males believe that being passed out is a woman’s coy form of consent. New York’s governor is now pushing for a similar law in that state. Comparable laws are being considered by legislatures around the country.

Such legislation is especially necessary in light of the widespread negligence of our colleges and universities when it comes to thoroughly investigating claims of sexual assault and educating students about consent. When it comes to both those necessities, college administrators today receive an F-minus. And those administrators and campus security personnel who neglected their duties to launch sincere investigations of sexual assault claims should be, at the very least, fired from their jobs and at most sued for or charged with criminal negligence.

Maybe that sounds harsh, but they’ve been entrusted with not just our children, but the future success of our society. Their negligence is the result not of ignorance but of greed: protecting their brand so they can lure more unsuspecting students, grants, and alumni donations. How is this any different than some primitive tribe sacrificing their children to the gods in hope of a better harvest? Worse, how is this any different from the behavior of sexual predators?

The danger is magnified by the widespread college policy of allowing students accused of sexual assault to simply withdraw from college before their disciplinary hearings and transfer to another school, with no specific record on their transcripts that they might be a threat. Though there are many such cases known, the most egregious involves Jesse Matthew, Jr., who has been charged with the murder of University of Virginia student Hannah Graham. He has now also been charged with the abduction and murder of a Virginia Tech student. He had been accused two times previously of sexual assault at colleges; he was able to leave one school to enroll in another. It’s a severe case of Not My Problem, which has already killed more people in this country than Ebola.

What makes this situation even worse is that these colleges aren’t just ignoring the problem, but by doing so they are encouraging the problem to grow. As institutions of learning, our colleges and universities aren’t charged with just teaching the nuances of mathematical equations and the uses of metaphor in poetry, they are supposed to be teaching social values, if not directly then by their own behavior. Any tolerance of sexual assault teaches those students that women are somehow less deserving of protection than men in society, that sexual aggression by men is perfectly okay, and that even if we huff and puff about how it isn’t okay (wink, wink), nothing much will be done about it. It’s not enough to provide panic buttons around campus or train female students how to be alert to predators, we must attack the bros-before-hos mentality as not cool or high-five worthy.

As a former college athlete, I’m especially aware of the culture of entitlement that some athletes feel as they strut around campus with the belief that they can do no wrong. This ridiculous notion certainly has contributed to the alarming statistics concerning athletes and rape. A 1995 review of reported sexual assault cases at schools with Division I sports programs found that although male student-athletes made up only 3.3% of the campus population at these schools, they accounted for 19% of sexual assault perpetrators and 35% of domestic violence perpetrators. Related research has also found that athletes are far less likely to be convicted of sexual assault than members of the general public. These statistics should be shocking, but sadly they probably aren’t to most people.

A major contributing factor to athletes becoming sexual predators is our culture’s need to elevate them to heroic status. Yes, they deserve praise for their accomplishments, but throwing a football or dunking a basketball shouldn’t make anyone a hero. Being a hero comes from commitment to community, sacrificing selfish gain for the betterment of others, fighting for a just cause. Athletes can become heroes for doing these things, but not just for putting points on a scoreboard. We can honor their accomplishments without making them privileged.

Schools can and should play a part in changing male behavior, but this process must start in other areas such as the home and in the media, because these are where our children learn about gender identities. Where do guys get the idea that it’s okay to pursue sex even when the woman isn’t interested? They get the idea from testosterone thrumming through their brains, but they get the entitlement from subtle social cues. Having a biological impulse is not a license. Every time we tolerate the unironic use of the word “bitch,” we’re encouraging this view of women as inferior. Every time we tolerate phrases like “don’t be such a girl” as a putdown, we’re promoting the woman as prey. Every time we see a movie or TV show in which a woman tells the man she hates him and then he forces a kiss on her, which she at first resists then melts into, we’re advocating sexual assault as being “romantic.”

Legislating romance is a tricky business. And California’s bill is not without some word-definition problems. But it’s a giant leap for humankind in doing what our colleges have failed in doing, protecting students. Some opponents complain that stopping to say “Yes, I want to have sex with you” will somehow kill the mood. Do they really think that two college students who are about to have sex will be deterred by having to articulate their desire? Will they suddenly stop undressing and say, “You know, now that I’ve said it aloud, I’m no longer in the mood”? But even if that did happen, so what? If giving verbal consent is the dealbreaker here, then maybe there shouldn’t be a “deal” in the first place.

With roughly 57% of college students being female, it’s time that other states enacted legislation similar to California’s, not just to protect women, but also to promote the ideals of equality that these schools teach in the classrooms but don’t enforce on the campuses.

A few years ago, I saw a 60 Minutes interview with singer Mary J. Blige in which she described her own sexual molestation at age five as well as the brutal violence men in her neighborhood committed against women. “Men just seemed like they didn’t have any mercy,” she said. Of course, she didn’t mean all men; she was commenting on a child’s view of the world through observing ceaseless assaults. That phrase has resonated with me. I don’t want one more child to see the world that way. Legislation won’t solve the problem, but it’s step. A step toward mercy. 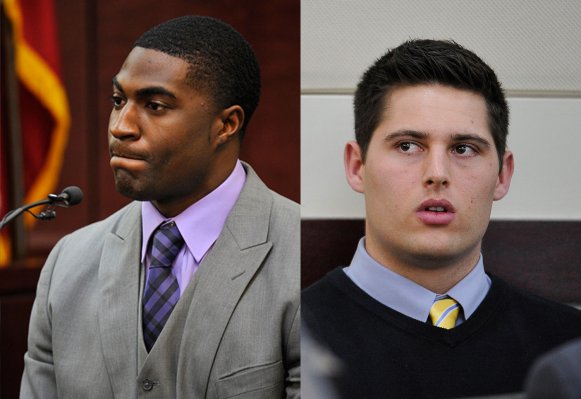 The Vanderbilt Rape Case Will Change the Way Victims Feel About the Courts
Next Up: Editor's Pick