Wendy Williams Explains What Celebrities Can Learn From Kim Kardashian

How is Wendy Williams doin’? Pretty great, actually—the storied radio personality turned syndicated talk-show host is celebrating 1,000 episodes of The Wendy Williams Show, now in its sixth season. And when she’s not discussing her Hot Topics and giving audience members unfiltered advice on camera, she’s producing a number of projects behind-the-scenes (like Lifetime’s Aaliyah movie last year), overseeing her wigs line and developing a clothing line to add to the collection.

TIME caught up with Williams a few days before the big milestone to talk about her celebrity bucket list, the importance of trashy reality shows and why she loves Judge Judy.

TIME: Looking back, who has been your most awkward interview?
Wendy Williams: I can’t call it awkward, but certainly it was different, and that was Russell Brand. I found him smart, witty and sexy! And he smelled good. But here’s the kicker: He was on Howard Stern, and Howard said, “Who are you crushing on now?” He said, “That black lady with the talk show, Wendy Williams!” When he came to the show, everything that I said, he would bring it back to me and how he’s attracted to me. Not in a disrespectful way! I was blushing on the inside.

Who of your frequent celebrity targets has the best sense of humor about it?
Kim Kardashian. Listen, Kim has a really good sense of humor. She knows who she is, she knows what she puts out there. She is not one for her feathers to be ruffled. After six seasons, I would hope that celebrities understand that I’m really no different than Rona Barrett, Walter Winchell—two legendary celebrity chatters—and what I do is no different than Life & Style magazine or the entertainment section of TIME magazine. The same stories that I’m telling are the stories people are talking about! Maybe it’s the way I deliver. I come with strong opinions, but strong opinions are what drive the show.

Who is the most elusive? Whom do you want on your show but haven’t been able to book?
The Rock. I think he’s handsome. I’d love for him to pick me up and curl me. And then I want to sit down and talk to him—he seems like a down guy. I’ve met most of my heroes, not necessarily on the show, but in real life. Judge Judy came this season. Oh my God, she is the aunt I always wanted to have. You tell her things you don’t tell your own mother, and then she gives you straight talk with the answer. It was my understanding that Judge Judy does not do a lot of talk shows. I said, “Okay, that will never happen,” and then I see she wants to come to the show! She came, and her husband Jerry sat in the audience. Judy was telling me that Jerry watches my show on the treadmill every morning. I will treasure that moment forever. But general wish list? I don’t really have one. As a matter of fact, I love meeting celebrities, but my favorite Wendy shows are all Hot Topics and Ask Wendy.

How do you vet and choose Hot Topics when celebrity gossip can be so unreliable?
We usually deal with two or more sources. We never just take one source and run with it and put it on Hot Topics. We have a legal department in our building. My Hot Topics team is very good at raking through. They might give 10 stories on any given day in a morning meeting, but I might only get to five stories. I read stuff, I watch TV, I come with stories. Maybe that’s why it comes so naturally—I’m really interested in celebrity culture and really do care! More often than not my team is right on point. It is a collaborative effort, and I listen with respect to everyone on staff. I just happen to be the lucky girl with my name on the marquee. When I don’t want to do something, it’s never a hard no. Convince me why I should. Convince me why I should wear that dress, or why the sky is blue when I see green.

Some people think celebrity culture and reality TV are trashy. Why is it important to have “low-brow” entertainment in our culture?
Reality TV is kind of a reflection of how the world is running these days. We have no attention span. Microwaves aren’t fast enough for us anymore. Some of the best shows on TV get canceled after three episodes. People aren’t given a chance. We forget about our entertainers if they’re not in front of us. We move on to the next one. Now, for a lot of people—and me, sometimes, I’m embarrassed to say—a reality show is not a reality show without someone being dragged across the floor by their hair. I like cute reality. You’re never going to catch any wig-pulling on Wahlburgers. But I also have been known to glance at Love & Hip Hop. The more ratchet, the more entertaining. It’s escape.

Has there ever been a question you regret asking?
No, but there’s a question I regret not asking. Chris Rock was on the show. He’s always a great guest, very funny, very engaging, very honest. A week after he goes on the show, it’s announced that he’s getting a divorce from his wife of 18 years. I had no idea that they were actually getting a divorce. You hear about marital discord, but if you’re married, there’s always discord going on. I didn’t know they were going to be divorcing, so I felt duped. I often wonder if I had said to Chris, “So how is Malak, everything still good after 18 years?” Would he have answered me honestly? Would have I gotten a good scoop for the world? I will never know—until I run into him again.

You did radio for decades before moving to TV. What was the biggest surprise?
Nothing was really surprising, but there were a few adjustments I was resistant to: people helping. I’m not good at people helping. I’m now used to somebody shopping for me or somebody doing my hair or doing my makeup. I don’t need people under me all the time asking, “Do you need anything? Are you okay?” I’m fine! I know that sounds like an odd problem, but I’m fiercely independent and didn’t get this kind of success until I was in my 40s. I already knew what it was like to change a tire, get a mortgage, to be a fully grown woman. With success on TV, life has become more complicated. You don’t just run up to the ATM and drop your paycheck in anymore. You don’t just do things. Everything has to be planned or an event. I can’t just talk to you on the phone. There’s two other people on the phone! There’s the publicist and my assistant. It’s all odd!

You became well-known on the radio for being so confessional. Is it harder to be intimate in front of a live audience?
No, I actually find myself making a concerted effort not to say one word too many. Doing that show is as easy as slipping on a comfortable pair of jeans. They say the number one fear is public speaking—I’ve never had a problem with that. I light up when I have to entertain. Radio helped me develop an already-fertile imagination. In radio, it’s you in a room. You have to be a real wordsmith. You have to use your words to paint a picture. That’s the best training I could have had to keep this show going. I still use that same language to paint a picture, only now I can see the crowd’s reaction. They sit there and they laugh, or they think I’m ridiculous. Either way, no one’s falling asleep. 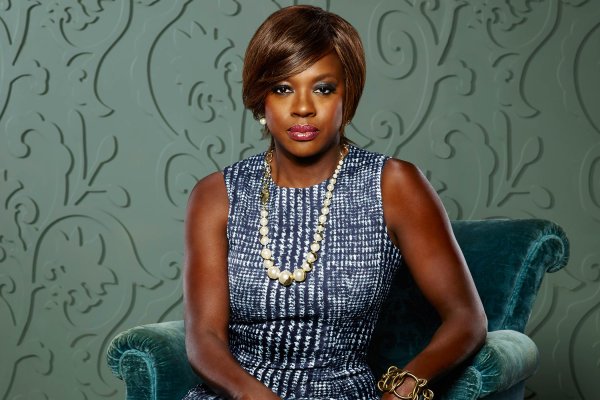 Viola Davis Says Filming <i>How To Get Away With Murder</i> Sex Scenes Should Be Uncomfortable
Next Up: Editor's Pick