But ours is also a land of iPhone users and everyone else. If you happen to huddle around an Apple smartphone or tablet, these seven apps can help make your game day a big hit, from planning your snack attack to posting your post-game celebratory photos.

NFL Homegating: If you’re going to pull on your game jersey and throw a party, don’t just dress the part — do it like a pro with the help of an official NFL app. Stuffed with football-friendly recipes from Marc Payero, the executive chef at the NFL Huddle Cafe, Homegating can help you craft a menu from finger foods, like honey sesame chicken wings, through fourth quarter sweets, like cinnamon streusel cake.

You can also hand off all your party invites to the free app, signing into it through Facebook (or other online accounts) and then sending all the get-together details to your friends through the service. It will also aggregate an entire season of party pics and videos from all your Sunday gatherings, which could be epic if your team eventually goes on to win the big game.

Football Squares Plus: Football pools help make Super Bowl Sunday fun for everyone, even if your team is on the losing end of the score. This $2.99 iPad app can help you streamline the tedious square-selecting process, not just by making it paperless, but by letting your party people buy their boxes with the free Squares Buyer for Football Squares Plus companion app.

Of course, not everyone has an iPhone, so mirroring the iPad app using Airplay and an Apple TV can give all your attendees a peek at the side action. And the app can also run other kinds of pools, like baby birthdate guessing, so it’s not a one-trick pony (unlike some team’s offensive schemes).

Super Bowl XLIK Digital Game Program: Capture all the excitement of actually going to the game — without having to pay the $5,700 that Stubhub is currently asking fans for — with this digital download of the official game program. With recaps of the current season, interactive content, and video clips, it’s an excellent summary of the road that brought the Patriots and Seahawks to Arizona. And loaded with trivia from championships past, the app is a great way to learn about the history of the big game, or to settle some sideline arguments.

Betting Odds: What are the odds on the biggest game of the year? Well that depends on who you ask and when you ask them. SportsInsights, a wagering analytics company, keeps tabs on more than 40 sports books from around the world and constantly updates the line. This free iPad and iPhone app gives you ongoing access to their expert takes, with lines, spreads, odds, over-unders and even line movement data, sending push alerts for breaking news such as injuries or weather.

This kind of information can help you make perfect picks not just for the Super Bowl, but also for NBA and MLB games, greatly enhancing your enjoyment of the sports . . . because it’s for entertainment purposes only, right?

NFL Mobile: Whether you’re at the game (lucky you) or not, the league’s official mobile app is a must-tap for football fans. On site, it provides maps and guides for all the weekend’s events. But in living rooms across America, this thing is stuffed with everything from live streaming of Media Day player cams to videos of the Super Bowl Commercials (which some people enjoy more than the game). Verizon customers get an added perk of being able to live stream the game itself through the app, which is great if you can’t blitz the couch and catch it on a big screen.

Madden Mobile: With both teams featuring strong defenses, it’s unlikely Sunday’s championship will be a blowout. But if it is — or if you’d rather take a pass on Katy Perry’s halftime fireworks — this free game should already be downloaded and ready to go. Fully-sponsored by the NFL and the player’s association, this football game franchise not only has every team and all the players, it also offers a variety of ways to play, like head-to-head matches or creating your own league.

In addition, leading up to Sunday’s showdown, live events give players the opportunity to earn bonus points, letting you get your team as stacked as possible.

Fancred: Win or lose, you’re going to want to be surrounded by your fellow fans once the final whistle blows, and online that can be difficult. There’s a lot of haters out there — especially on social networks — and they’re quick to rip their opposing fans. Fancred, a mixed media social network focussing on sports, is a place where you can connect with people who also follow your team (and avoid those yahoos rooting for the other guys).

Pulling in photos, news stories, and more from your friends, athletes, official team online presences, and media members, Fancred a great way to connect post-game, in the off-season, or even in the middle of a match with people who wear the same colors that you do. 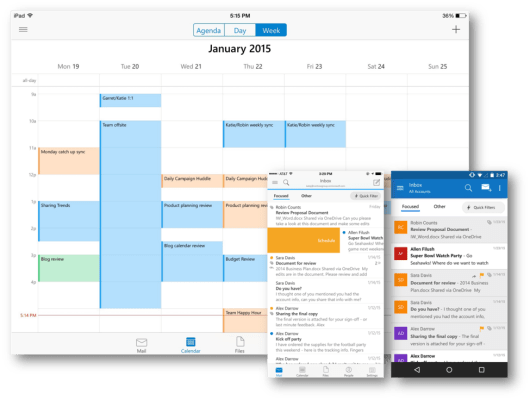 iPhone and Android Finally Have a Full-Featured Outlook App
Next Up: Editor's Pick