Brittany Maynard's Memory Is Helping Us Achieve Death With Dignity

Ideas
By Barbara Coombs Lee
Barbara Coombs Lee is president of Compassion & Choices, the nation's oldest and largest nonprofit organization working to improve care and expand choice at the end of life.

In June of 2014, 29-year-old Brittany Maynard moved to Oregon in order to legally obtain aid-in-dying medication after she was diagnosed with terminally ill cancer. Inspired by her public advocacy, this month, California State Senate Majority Leader Bill Monning and Senate Majority Whip Lois Wolk introduced “The End-of-Life Options Act,” a bill modeled after the Oregon’s Death With Dignity Act.

This is not the first time lawmakers in California and other states have considered legislation to follow Oregon’s lead and grant terminally ill, mentally competent adults the option to request aid-in-dying medication from their physicians and ingest it if the dying process becomes intolerable.

But since Brittany’s death, nationwide demand for similar state laws has skyrocketed.

Recent national polls show 74 percent of Americans and 54 percent of U.S. physicians want aid in dying to be an authorized medical option. They see that those who would deny patients this option are out of sync with new, and more just, expectations around end-of-life decisions.

This soaring support explains why legislators have introduced death-with-dignity bills, or pledged to do so, in Washington, D.C., and at least 13 states in addition to California. These states include Colorado, Florida, Indiana, Iowa, Maryland, Minnesota, Missouri, New Hampshire, New York, Nevada, Pennsylvania, Wisconsin, and Wyoming. Brittany’s story is also galvanizing previously existing campaigns in Connecticut, Massachusetts, and New Jersey.

Granted, introducing legislation is one thing; passing it is another. In two consecutive legislative sessions, 2005 and 2007, the nonprofit Compassion & Choices worked with California Assembly members Patty Berg and Lloyd Levine to pass a bill similar to “The End-of-Life Options Act.” But it failed under intense opposition from the California Medical Association and the California Conference of Catholic Bishops.

That is why Brittany Maynard had to leave her Bay Area home and move to Oregon after doctors learned brain cancer was killing her. Surgery was unsuccessful, and no hope for cure remained. When Brittany asked what would happen before she died, doctors described intense headaches, seizures of increasing frequency and duration, blindness, dramatic personality changes, and loss of every brain function, including movement and thought, as death approached.

Knowing she wanted the option of a peaceful, humane death before those horrors came, she moved with her family to Portland, and took all the steps to qualify and receive aid-in-dying medication. Then, she felt secure in the ability to live fully and vibrantly, but control the amount of suffering she would endure. Brittany passed away gently in her sleep on November 1, a few hours after suffering her last seizure and 30 minutes after swallowing her aid-in-dying medication.

Brittany devoted her waning days and energies to outspoken advocacy for legal reform in California and every other state. Before she died, the videos she recorded were viewed, shared on Facebook, and tweeted around the world. The story of her death on People.com was the most read story in the site’s history.

American and international media outlets still repeat Brittany’s story and report her words. Nearly 4,000 stories about her have appeared since her death, and this month, numerous national media outlets interviewed Brittany’s husband, Dan Diaz, and mother, Debbie Ziegler. They made a promise to Brittany, and they are dedicated to fulfill her mission to see the medical practice of aid in dying accessible in California and other states.

Brittany’s legacy is why the powerhouses of politicized medicine and politicized Catholicism are not likely to defeat end-of-life options in California this time.

As the old adage goes, politics and sausage-making are both vile, and no one wants to see the process. In my experience, the powerful players who do not want dying patients to gain control over the suffering they endure or the circumstances of their deaths use their formidable power ruthlessly to maintain the status quo.

Our legislative supporters face the usual threats of lost campaign contributions and lost support for other unrelated bills. But they also face threats of shunning at the communion rail, excommunication, and expulsion from religious schools, hospitals, charities, and other institutions in their districts. They have faced threats to their livelihood and received letters from school children who had been told the lawmaker was going to kill their grandma.

These tactics have kept lawmakers from doing right by those who face end-of-life suffering. But, this time around, Brittany is here to stand up for the dying through her family and friends. This time, 100 million Americans know about Brittany Maynard and why she needed aid in dying as an accessible medical option. This time, the 17-year Oregon experience has moved aid-in-dying beyond a policy debate. Generation Xers like Brittany, baby boomers, and their elderly parents know what is at stake. And they want options for themselves and their families. This time, half-a-million online activists will follow the legislation’s progress. These folks signed the guest book at TheBrittanyFund.org and vowed to carry on her advocacy after she died. If the bill fails this time, millions of Californians will know why.

In her last video Brittany said, “I hope for the sake of other Americans … that this choice be extended to you…That we mobilize, that we vocalize, that we start to talk about it.” Less than three months after her death, Brittany’s vision is coming true. 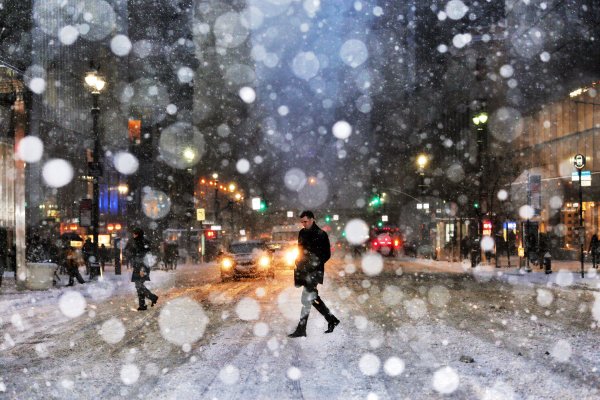 9 Takeaways from the 2015 Blizzard Bust
Next Up: Editor's Pick