Rare Megamouth Shark Washes Up In The Philippines

Fishermen use a stretcher with steels bars to carry a rare 15-foot megamouth shark, which was trapped in a fishermen's net in Burias Pass in Albay and Masbate provinces, central Philippines, Jan. 28, 2015.
Rhaydz Barcia—Reuters
By NBC News

A dead megamouth shark (Megachasma pelagios) was discovered by fishermen in the Philippines on Wednesday, providing a rare glimpse of a mysterious animal that spends much of its life in the deep ocean.

It was found in the Burias Pass, located between the Albay and Masbate provinces of central Philippines. Less than 70 megamouth sharks have ever been spotted, according to marine biologist Christopher Bird and Marine Wildlife Watch of the Philippines.

The 15-foot male was dead when it was discovered. The cause of death is unknown. Very little is known about the megamouth shark, an extremely rare species of deepwater shark that was only first discovered in 1976. Most wash up on the coasts of the Philippines, Japan and Taiwan. 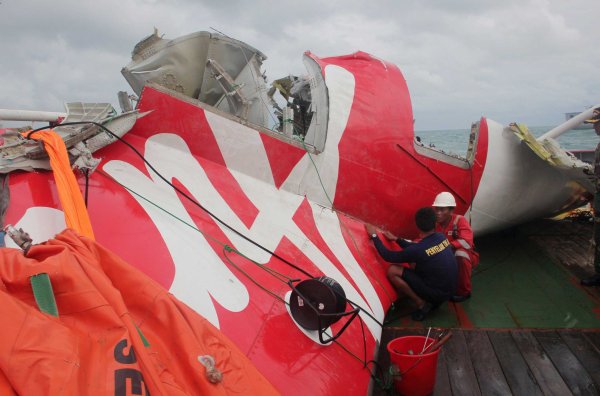 Co-Pilot Was Flying AirAsia Flight When It Crashed
Next Up: Editor's Pick