On Jan. 25, Greek voters reminded the world that Europe’s recovery from crisis remains unfinished by voting in the Euroskeptic party Syriza. Greece isn’t about to leave–or be shoved from–the euro zone. But the labor and budgetary reforms needed in countries like Greece, Italy and Spain to restore Europe’s economic vitality are far from complete. Combined with other woes, like political fragmentation in major capitals and national-security threats, the continent faces challenges that may well throw its slow recovery into reverse this year. Which is why European consumers and international investors are getting queasy–and why the E.U. is ground zero for the collision of politics and the global economy in 2015.

Syriza’s win draws new attention to the rising tide of anti-E.U. parties. Spain’s Podemos, a leftist party like Syriza, could enter government by the end of this year. But this isn’t just a phenomenon of the left. Britain’s United Kingdom Independence Party (UKIP) and France’s National Front are pulling mainstream rivals to the right. Leaders of Italy’s Five Star Movement and the Alternative for Germany party, who reject labels of left and right, add to the sound and fury. The result is divided legislatures that will struggle to advance needed economic reforms, reversing progress made since the height of the euro-zone crisis in 2011 and ’12.

But the political pressure to deliver a balanced budget in Germany will ensure that Chancellor Angela Merkel’s push for painful reform in weaker E.U. countries will continue. The growing popularity of Alternative for Germany will weigh on her too as local German elections loom in February and May.

And there isn’t much appetite for compromise from other core E.U. members. France is too weak to carry real weight in Berlin. UKIP will ensure that Britain’s Conservatives keep their distance from E.U. problems in advance of British national elections in May. A strong Germany, weak France and absent Britain is a bad formula for restoring European growth–and E.U. unity.

Adding to Europe’s headaches, the conflicts in Iraq and Syria–and sympathy for Islamic militants among some in Europe’s minority Muslim communities–could provoke more terrorist attacks. Then there’s the pressure from the east. Many Europeans would like to boost the economy by easing sanctions on Russia. But Vladimir Putin’s continued mischief in Ukraine will make that difficult.

Put it all together and Europe is in for a rough ride in 2015.

Foreign-affairs columnist Bremmer is the president of Eurasia Group, a political-risk consultancy. His next book, Superpower: Three Choices for America’s Role in the World, will be published in May.

‘The trail of polonium traces leads not just from London to Moscow but directly to the door of Vladimir Putin’s office.’

BEN EMMERSON, attorney for the widow of ex–KGB agent and whistle-blower Alexander Litvinenko, speaking on Jan. 27 at the opening of a public inquiry into Litvinenko’s 2006 death in London by poisoning with polonium, a rare radioactive isotope; Russia has denied involvement in his death

THE AGES OF ROYALTY

King Abdullah of Saudi Arabia was, at 90, the oldest sovereign when he died on Jan. 23. Here are the world’s five oldest national monarchs:

Activist Shaimaa al-Sabbagh collapses into the arms of a fellow protester after being shot, allegedly by police, during a small leftist protest in Cairo on Jan. 24 to mark the anniversary of the Arab Spring uprising that ousted autocrat Hosni Mubarak in 2011. Al-Sabbagh later died of her wounds, and at least 23 others were killed the following day in the most violent protests since former army chief Abdul Fattah al-Sisi was elected President in May. Reuters/Al Youm Al Saabi

The minute hand of the Doomsday Clock was moved forward two minutes to 11:57 on Jan. 22, the first adjustment in three years. The time on the clock, which was created in 1945, is set by a board of scientists and nuclear experts and symbolizes the world’s proximity to global catastrophe. Here are three times the clock shifted back and forth:

The minute hand reached its closest point to midnight so far after both the U.S. and the Soviet Union tested thermonuclear devices, or hydrogen bombs, up to 500 times as powerful as the bomb dropped on Nagasaki during World War II.

When the U.S. and USSR signed the first Strategic Arms Reduction Treaty to cut the size of their warhead arsenals by roughly 35%, the clock’s operators decided the world was the furthest from calamity since the clock’s inception.

Programs to modernize nuclear weapons in both the U.S. and Russia helped push the clock closer to midnight. But the board also cited the threat of climate change, saying current efforts to protect the planet are “entirely insufficient.”

Number of fighters killed by U.S.-led air strikes on ISIS targets in Syria and Iraq, according to U.S. Ambassador to Iraq Stuart Jones in an interview with al-Arabiya television; the unexpected disclosure prompted the Pentagon to clarify that the death toll was not a key “metric of success”

Former Thai Prime Minister Yingluck Shinawatra vowed on Jan. 23 that she would prove her innocence after authorities said they would indict her on corruption charges. On the same day, the military-led government that ousted her in May barred her from politics for five years.

Argentine President Cristina Fernández de Kirchner moved to dissolve the country’s intelligence services on Jan. 26 after suggesting rogue agents were involved in the mysterious death of a prosecutor investigating the deadly 1994 bombing of a Jewish center.

The government in Taiwan approved a controversial law that would fine parents up to $1,600 if they allowed children under the age of 18 to use electronic devices “for a period of time that is not reasonable.” 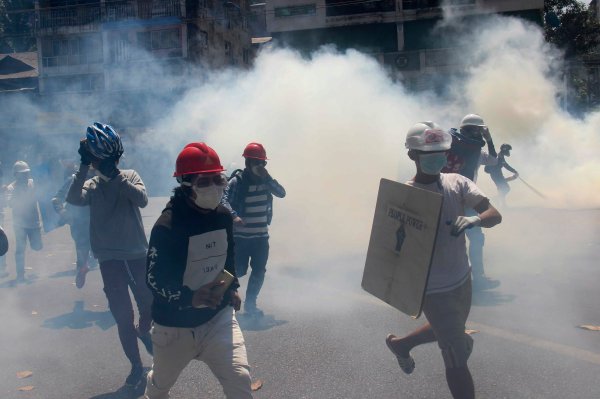 Defying Lethal Shootings, Myanmar Protesters Back on Streets
Next Up: Editor's Pick