On Wednesday, two former Vanderbilt University football stars were convicted by a Nashville jury of aggravated rape and aggravated sexual battery. Cory Batey and Brandon Vandenburg could serve decades behind bars for gang raping a fellow student in a dorm room in 2013. (Their argument that they were drunk and thus not in their right minds at the time of the attack was quickly dismissed by the court as a poor excuse for their violence.) The decision offers hope to victims of campus rape who, up until now, have shied away from reporting assaults to the police.

A recent study from the Justice Department found that 80% of campus rapes went unreported to the authorities (compared to a still-disheartening 67% in the general population). Victims of campus sexual assault have many reasons to choose a campus judiciary process over reporting the assault to the police. These victims are often in the position of living on the same campus as their assailant and thus forced to encounter them in the school cafeteria, in classrooms or in the library—places no student can avoid. Depending on the school’s policies, filing criminal charges against an assailant may not necessarily get him removed from campus, whereas a quicker, quieter campus judgment can. In the minds of many victims, the fastest way to feel safe is by going to the dean not the police.

Victims’ advocates have said that some students believe faculty members will be more sympathetic to assault claims than the police. “If you’re a person of color or you’re queer, the process of going to the police also can be one that is not necessarily competent or great to deal with,” Caitlin Lowell of the Coalition Against Sexual Violence at Columbia University told TIME last year.

Perhaps the most compelling reason students are deterred from reporting a rape to the police is that they think they will spend years going through the criminal judicial process reliving the agony of their attack only to be denied justice. A tiny fraction of accused rapists will ever serve a day in prison, according to the Rape, Abuse and Incest National Network (RAINN).

But the criminal justice system can provide guarantees that campuses cannot. If the news cycle from the past year has taught us anything, it’s that universities—from Columbia University to Florida State University—are not equipped to adjudicate these cases. Students complain that evidence is not systematically collected, hearings are often held without attorneys present and administration officials and those designated to preside over these cases have posed inappropriate questions. In theory, our courts are the best way to ensure that rapists are removed from our streets, and the Vanderbilt case—along with the recent arrest of a Stanford University swimmer who allegedly raped an unconscious woman on campus grounds— suggests that in practice that may finally be the case. (The Stanford student was barred from campus after his arrest, highlighting the importance of police involvement.)

MORE: ‘My Rapist Is Still on Campus’: Sex Assault in the Ivy League

The evidence in the Vanderbilt case was hard to dismiss. Though the victim (whose anonymity is being preserved by TIME and other news outlets) said she did not remember what happened the night of her attack after she lost consciousness, other players testified that they saw Vanbenburg slap her buttocks and say he could not have sex because he was high on cocaine. They also said that Batey raped the woman and then urinated on her. (Two other players who have pled not guilty will be tried later.)

University surveillance videos of players carrying an unconscious woman through a dormitory and graphic images of the assault taken from players’ phones proved that the victim was unconscious and confirmed which players participated in the gang rape. There was no DNA evidence, but one player testified that Vandenburg—who can be heard laughing and encouraging the assault in a video shown in court—passed out condoms to the other players.

Most victims are not able to bring so much evidence to the court. And many victims would understandably worry that they wouldn’t be able to finish their degree while enduring this arduous process. (The victim in this case impressively did and is now pursuing a Ph.D. in neuroscience at another university.)

Assault survivors should take comfort in this small victory. “I want to remind other victims of sexual violence: You are not alone. You are not to blame,” the victim said in a statement that was read by Assistant District Attorney Jan Norman in a press conference.

Bringing rapists to justice is just one piece of fighting the campus rape epidemic. In the Vanderbilt case, police said that five other athletes saw the victim in distress and did nothing to intervene or report her attackers. Even if our criminal justice system were perfect, it could not stop rape from happening. That’s why the White House is currently promoting a bystander intervention educational campaign on campuses. Ultimately it’s up to students to watch out for one another.

Read Next: Rose Byrne on Frat Culture and How Bystanders Can Stop Sexual Assault 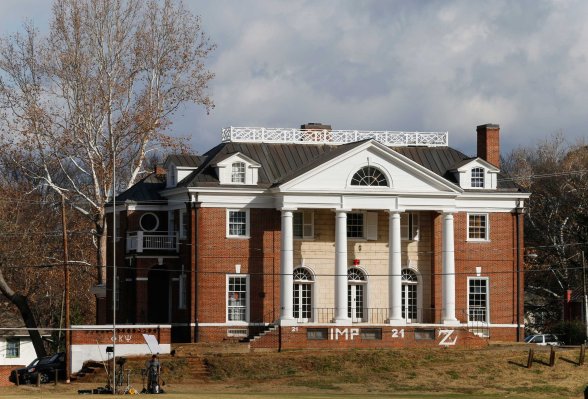