Skirmishes between forces in Lebanon and Israel are a regular occurrence that only occasionally result in death. But when there are fatalities, the need to retaliate can spiral into war quickly, as it did in 2006.

The exchange of fire on Wednesday between the Lebanese Shiite militia Hizballah and the Israeli army left two Israeli soldiers and a United Nations peacekeeper in Lebanon dead. The attack, which was initiated by Hizballah, appears to have been a response to an Israeli operation in Syria earlier in the month.

On Jan. 18, Israeli missiles hit a convoy of cars driving near Quneitra in Syria, just below Israeli positions in the Golan Heights. Israel remained silent about the attack but the news emerged that six members of Hizballah and an Iranian general were killed.

“A group of fighters and Islamic Resistance [Hizballah] forces were with General Mohammad Ali Allahdadi as they visited the region of Quneitra. They were attacked by a military helicopter of the Zionist regime. This brave general was martyred in this attack alongside some members of Hizballah,” according to a statement issued by Iran’s Fars news agency.

The rhetoric of revenge in the Middle East is fairly predictable. Soon after the Jan. 18 attack a Hizballah official said: “Hizballah’s leadership cannot accept the blow it received from the Israeli strike and the killing of officials. Hizballah’s leadership will choose how and when to respond to this criminal Israeli attack.”

Israel knew, however, that this time the rhetoric would probably result in an attack and had been waiting ever since.

Ron Ben-Yishai, a military analyst with the Israeli news site Ynet, gave his forecast of Hizballah and Iran’s likely response on Jan. 19:

And so it came to pass on Wednesday that Hizballah ambushed an Israeli border convoy and fired anti-tank missiles at it killing two and injuring seven and reducing two armoured vehicles to blazing wrecks. Israel launched an artillery attack in response, killing the Spanish soldier at his U.N. base in southern Lebanon.

As the artillery died down on Wednesday, Israeli army spokesman Peter Lerner issued this tweet: “We have responded to Hizballah’s escalation, IDF will continue to operate in order to safeguard Israel.” His use of the past tense in the first sentence implied that as long as there are no further attacks on Israel the Israeli military would hold fire.

Ben-Yishai explained Israel’s thinking on Wednesday: “Does Israel now enter into a broader conflict with Hizballah or should it let it go on the grounds that this is Hizballah settling their account with us? It’s cruel to say, but this is frequently this way: When they have shed enough Israeli blood, they will have apparently responded sufficiently enough to stop.”

For now it appears that honor has been satisfied. In 2006 a similar Hizballah attack led to the 34-day Second Lebanon War that left 165 Israelis and thousands of Lebanese dead and both sides at a stalemate. This time, a similar escalation appears to have been averted. 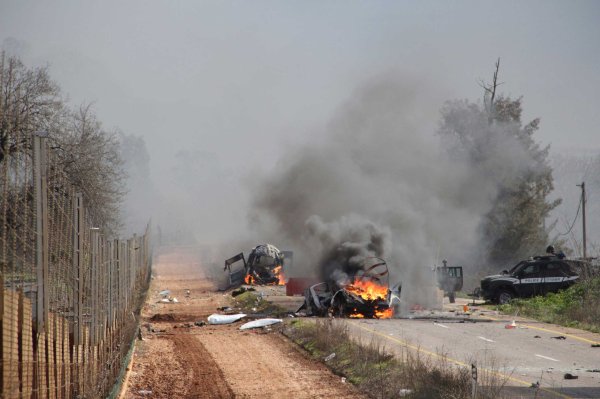 See Aftermath of Hizballah's Attack on Israel
Next Up: Editor's Pick