Israeli soldiers carry an injured comrade after an anti-tank missile hit an army vehicle in an occupied area on the border with Lebanon on Jan. 28, 2015.
Jalaa Marey—AFP/Getty Images
By Conal Urquhart

At least two Israeli soldiers were killed Wednesday when anti-tank missiles were fired at an Israeli convoy on the Golan Heights from Lebanon.

Israel retaliated by firing dozens of artillery shells into southern Lebanon and convened a emergency security meeting in Tel Aviv.

Benjamin Netanyahu, the Israeli Prime Minister tweeted: “At this moment the IDF [Israeli Defense Force] responds to events in the North. We will not allow terrorists to disrupt the lives of our citizens and threaten their security. We will respond forcefully those who try to challenge us.”

Hizballah claimed on al-Manar TV in Lebanon that they had attacked an Israeli military convoy. In a statement, Hizballah said its fighters destroyed a number of Israeli vehicles that were carrying Israeli officers and soldiers and caused casualties among “enemy ranks.”

It said the attack was carried out by a group calling itself the “heroic martyrs of Quneitra,” — referring to an area in Syria where Israel killed six members of Hizballah and an Iranian general on Jan. 18.

Wednesday’s attack took place near Mount Dov and Shebaa Farms, a disputed tract of land where the borders of Israel, Lebanon and Syria meet. 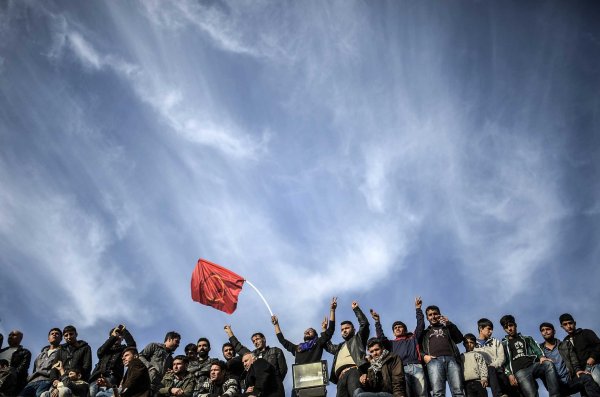 See Kurds Celebrate After Victory Is Declared Over ISIS in Kobani
Next Up: Editor's Pick