On Sunday, Indonesian President Joko Widodo wrote on his Facebook page: “Suro Diro Joyonirat Lebur Dening Pangastuti.” The Javanese words of wisdom teach that stubbornness, narrow-mindedness and anger can only be overcome by wisdom, kindness and patience.

Jokowi, as the President is popularly known, could use lots of wisdom and patience these days. His first 100 days in office — usually a peak of a leader’s approval ratings — have been marked with rising public disappointment and slipping popularity — not to mention a major political crisis he has largely created himself.

On Jan. 9, Jokowi shocked the nation when he nominated Budi Gunawan as police chief. Budi, a onetime adjutant to Megawati Sukarnoputri, former President and chairwoman of Jokowi’s party, PDI-P, and reportedly also close to Vice President Jusuf Kalla, had been investigated for months by the Corruption Eradication Agency. Days later, on Jan. 13, the agency, known in Bahasa Indonesia as KPK, named the three-star police general as a graft suspect in the so-called fat-bank-account case. Despite this, the divided parliament — seen as the most corrupt public institution in Indonesia, along with the police — was united to endorse Budi.

On Friday, the police made a stunning move, arresting the highly respected KPK deputy chief Bambang Widjojanto. He was accused of inciting perjury when he was a lawyer representing regional politicians in a Constitutional Court case in 2010 — a trumped-up charge, say both KPK and civil-society figures. The news of the arrest, and images of an anticorruption official in handcuffs, sparked widespread anger, with citizens seeing it as another attempt by the police to weaken and intimidate the KPK. (In 2009, the police charged two KPK deputies with bribery; the Constitutional Court later ruled the charges were fabricated.) In the days that followed, the agency’s chief and its two other deputies were reported to police as well.

So far, Jokowi looks reluctant to take concrete steps to resolve the “gecko vs. crocodile” conflict, as the fight between the graft and crime busters has been dubbed. He gave in a little to public pressure by delaying Budi’s appointment and naming the deputy police chief as acting top cop. As the crisis mounted, he said on Sunday he would form an independent team — consisting of ex-KPK officials, a police general, a former Constitutional Court Justice and scholars — to advise him on the controversy. Otherwise, though, he has maintained a neutral stance, saying: “There shouldn’t be any crimininalization” and that both law-enforcement agencies should help each other.

Expectations were high when the former Solo mayor turned Jakarta governor was inaugurated as President on Oct. 20. The down-to-earth politician not only had pledged to push the badly needed economic and political reforms in the world’s fourth most populous nation — from removing red tape to fighting corruption — but also showed concerns on human rights. Jokowi, the first Indonesian President with no ties to the country’s political and military elite, is seen as “A New Hope,” as TIME’s cover said. The new elected leader, aware of Indonesia’s significance as the country with the biggest Muslim population in the world, told U.S. President Barack Obama in November in Beijing: “The elections have shown that Islam and democracy can work hand in hand.”

But optimism has turned into skepticism. “One hundred days in and Jokowi is already embroiled in a complex political conflict that threatens his presidency and is entirely of his own making,” says Jacqui Baker, lecturer in Southeast Asian politics at Murdoch University in Perth, Australia.

Joko Widodo means “courageous man” in Javanese, and there were times when the former furniture businessman won kudos for showing decisive leadership. He was hands-on, swift and empathetic in handling the search-and-rescue efforts of the AirAsia plane that crashed into the Java Sea late December. Economists heaped praise when he slashed fuel subsidies — a hot political issue that had led to riots in the past — and pledged to allocate the subsidy fund to finance infrastructure and welfare programs.

The 30% fuel-prices hike in November accelerated the inflation rate, however, and hurt his popularity. In a survey conducted in January, before the police-chief debacle, his approval rating stood at around 62%, down from nearly 75% in mid-October.

“The trend [of Jokowi’s popularity] is going down. He loses his shine,” says Burhanuddin Muhtadi, director of public affairs at pollster Lembaga Survei Indonesia, which conducted the surveys and will release the January results early next month.

It didn’t help that Jokowi had backed down from his campaign promise that he wouldn’t do any horse-trading, a fanciful notion to anyone familiar with Indonesia’s schismatic realpolitik. Being a political outsider, he needs support from the so-called party oligarchs — the political establishment who supports him, as reflected in his Cabinet lineup and other high-ranking appointments. Nearly half of his ministers are members of the political parties supporting him — Megawati’s daughter holds a senior Cabinet position — and his choices for Attorney General and police chief are linked with political patrons or their parties.

As it turns out, the President’s powerful backers are his major political liabilities. “Jokowi has revealed himself to be woefully hamstrung by his political allies, [Nasdem party chairman] Surya Paloh and Megawati — and their more experienced party machines,” adds Baker. “He is clearly outclassed and outmaneuvered.”

Despite the controversies, Jokowi has scored populist points through policies that draw out strong nationalist sentiments, such as destroying illegal foreign fishing boats that flout Indonesia’s maritime borders, and refusing to give clemency to drug traffickers on death row. On Jan. 18, Indonesia’s firing squads executed six convicted smugglers, five of whom were foreigners, sparking condemnation from human-rights activists and foreign leaders. Brazil and the Netherlands, whose citizens were among the dead, recalled their ambassadors in protest, while Nigeria summoned Jakarta’s envoy. The media in neighboring countries have similarly expressed dismay at Jokowi’s boat-burning policies.

“Jokowi has very few ways of asserting leadership,” Baker says. “Burning boats and executing drug traffickers are some of the few avenues left open to him.”

Even if Jokowi could get himself out of the “gecko vs. crocodile” controversy, his biggest political test yet to date, it may not be the last time that he is torn between the wish of his electorate and that of his political patrons. So far it’s the people who feel he is letting them down. Some of his biggest supporters have become his fiercest critics, and a few are already half-jesting about who else they should back in the next presidential election — and that does not bode well just three months in. 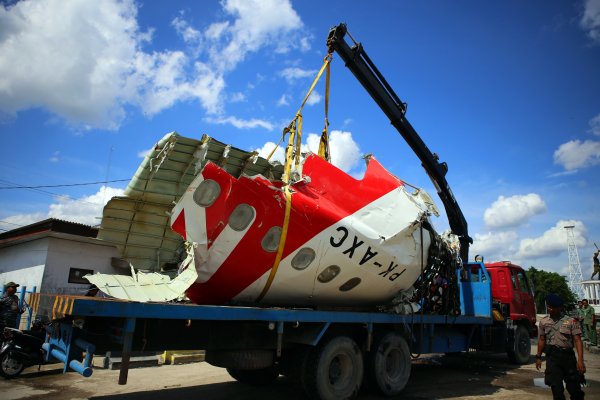 AirAsia Jet 'Climbed Too Fast' Before Crash
Next Up: Editor's Pick