SpaceX, Boeing on Track to Get Astronauts into Space by 2017

The unmanned Falcon 9 rocket launched by SpaceX on a cargo resupply service mission to the International Space Station lifts off from the Cape Canaveral Air Force Station in Cape Canaveral, Fla. on Jan. 10, 2015.
Mike Brown—Reuters
By Maya Rhodan

Boeing and SpaceX expect to be in a position to launch astronauts into space by 2017, NASA announced Monday.

At a press conference at Johnson Space Center in Houston, NASA said the two companies were on track to fly U.S. astronauts to the ISS within two years. Boeing and SpaceX have already completed some of the preliminary testing necessary to get vessels in orbit.

“It’s an incredible testament to American ingenuity and know-how, and an extraordinary validation of the vision we laid out just a few years ago as we prepared for the long-planned retirement of the space shuttle,” said Charlie Bolden, NASA administrator, according to a press release.

The two companies were selected to build vessels under NASA’s Commercial Crew Program, which will help the U.S. launch astronauts into low-earth orbit and get them to the International Space Station.

NASA retired its space shuttle program in 2011 and has been relying on Roscosmos, Russia’s space agency, to get astronauts into space ever since—at a cost of $71 million per seat.

“I don’t ever want to write another check to Roscosmos after 2017,” Bolden said Monday, according to NBC News. “If we can make that date, I’ll be a happy camper.”

Boeing expects to conduct a crewless test flight in April 2017 and one with a test pilot by that July. SpaceX said Monday they will conduct a crewless flight in late 2016, and get a pilot in the air by early 2017. Eventually, the program is also expected to open a pathway to getting private citizens into space. 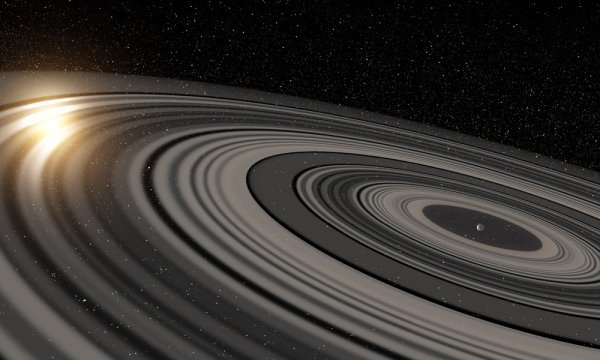 Rings Like Saturn's, but Supersized
Next Up: Editor's Pick