People hold a picture of a Kurdish fighter—killed during a battle with ISIS—during a celebration rally near the Turkish-Syrian border in Suruc, Turkey, on Jan. 27, 2015.
Bulent Kilic—AFP/Getty Images
By Harvey Morris

Kurdish fighters may have declared victory in a 134-day battle for Kobani and described it as the beginning of the end for the Islamic State in Iraq and Greater Syria (ISIS) but the group continues to hold large parts of both countries and the countryside that surrounds Kobani.

The loss of Kobani is certainly a setback for the jihadists, who first targeted the strategic crossing point between Syria and Turkey last year, long before the town took on symbolic status as a focus of resistance against the seemingly unstoppable insurgents.

With the support of air strikes by the U.S. and its allies, and the backing of Iraqi Kurdish armored troops who joined the fight in November, the Syrian Kurds gnawed away at ISIS positions to secure the last occupied pockets of a shattered town whose civilian population mostly fled months ago.

The victory, like the four-month battle that preceded it, is more symbolic than strategic. That was reflected in a statement from the local Kurdish People’s Defense Units (YPG) militia. “The battle for Kobani was not only a fight between the YPG and Daesh [ISIS],” they declared. “It was a battle between humanity and barbarity, a battle between freedom and tyranny, it was a battle between all human values and the enemies of humanity.”

As much as it was a symbolic victory for the Kurds and their allies, it was a symbolic defeat for ISIS, which has depended on the “propaganda of the deed” — a combination of lightning military victories and brutal terrorism — to rally recruits and to cow both its enemies and the civilian populations that have fallen under its sway.

In October, ISIS posted a video report from Kobani featuring John Cantlie, the British journalist being held by hostage by ISIS. The video boasts of ISIS’ control over Kobani and the failure of any of their opponents to dislodge them. On Tuesday, after the fall of Kobani, rather than boast about controlling a town, ISIS was reduced to threatening to kill a Jordanian pilot and a Japanese journalist that it holds.

It is debatable, however, whether the loss of Kobani marks the beginning of the end for the jihadists, who still hold wide swathes of territory and major cities in both Syria and neighboring Iraq.

“ISIS is still well-entrenched in the areas it controls and still has access to human and other resources,” says Dlawer Ala’aldeen, president of the Middle East Research Institute in Erbil. “It’s not the beginning of the end in any schematic way.”

The positive news from the frontlines in Iraq is that ISIS has been contained and is no longer making territorial gains. Indeed it has lost ground to Kurdish and other Iraqi forces in marginal areas. “But ISIS is by no means reduced enough to retake the big cities,” Ala’aldeen tells TIME in a telephone interview from the Iraqi Kurdistan capital.

In the case of Mosul, Iraq’s second-largest city that was captured by ISIS last June, “I don’t believe there is an imminent plan to liberate it because the Iraqis in general are not ready to organize the support of the local population,” he says.

There was also little prospect of Kurdish forces going it alone against ISIS in Mosul without first winning over the local Sunni Arab population. “It would be extremely difficult to recapture Mosul and, above all, to retain it,” Ala’aldeen says.

Until ISIS thrust itself into the international consciousness with the capture of Mosul, the declaration of a caliphate, and the widely diffused photos and videos of its beheadings, the threat it posed was largely overlooked.

When shortly afterwards ISIS began an offensive in northern Syria, the autonomous Kurdish administration in northeastern Syria sought vainly for outside support to save Kobani, which was virtually unknown and marked on most maps under its Arabic name of Ain al-Arab.

Turkish and Western governments were suspicious of the nature of the local Kurdish regime, headed by the Democratic Union Party (PYD) and linked to Turkey’s outlawed Kurdistan Workers’ Party (PKK) which is designated a terrorist organisation by the U.S. State Department.

By October, the game was almost up for Kobani’s embattled defenders when an 11th-hour intervention by the U.S. and its allies saw the first of a campaign of air strikes that helped slowly turn the tide against ISIS. Washington and its partners decided that the risks of intervention outweighed the prospect of another ISIS propaganda coup.

The PYD and its militia, along with other Kurdish groups, launched a massive and effective propaganda campaign that mirrored and contrasted with that of ISIS. The Kurds promoted their struggle as one of freedom and democracy and specifically highlighted the role of unveiled women fighters as a symbol of egalitarian secularity in the face of the jihadists’ perceived misogyny. “Save Kobani” became an internationally popularized slogan in the anti-ISIS struggle and dozens of Western volunteers traveled to join the Kurds.

It was not just about symbols. ISIS lost close on 1,000 fighters, having been forced to draft in reinforcements to try to avert defeat. The Kurds lost more than 300, according to the British-based Syrian Observatory for Human Rights, an organisation that monitors events in Syria.

Kobani may not be the Kurdish Stalingrad, as some suggested at the height of the conflict. ISIS still hold the Kobani hinterland and the liberation of the town is not a strategic turning-point. But symbols are important in a war that will depend largely on undermining an image of ISIS invincibility which is popular among some of the local population and foreign sympathizers. 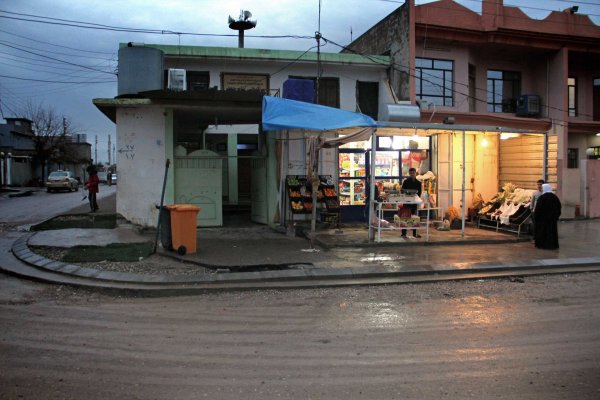