A powerful winter blizzard that spared New York City the worst of its wrath still wreaked havoc across much of New England on Tuesday, with more than two feet of snow expected to fall in Massachusetts along with winds above 70 miles per hour.

Almost 12,000 people lost power in Nantucket, thousands more did in Cape Cod and the coastal town of Scituate was flooded. About one-and-a-half-feet of snow had fallen on Boston by late Tuesday morning, with more expected, the Associated Press reports. The city of Worcester, 60 miles west of Boston, recorded accumulations as high as 25 inches, NBC News reports.

“This is clearly a very big storm for most of Massachusetts,” Gov. Charlie Baker said.

More than 7,000 flights were cancelled because of the snow costing the economy about $230 million, the U.S. Travel Association said. Still, what some had forecast to be one of the worst winter storms in recent history clearly didn’t pack as much punch as expected. Travel bans were lifted in Connecticut and western Massachusetts. And further south in New York City, the most dire predictions failed to materialize, raising questions for city and state officials who ordered a total shutdown of the city’s transportation system. The National Weather Service cancelled its blizzard warning for New York, and one official conceded the forecast had been off.

“This is a big forecast miss,” Gary Szatkowski, a meteorologist at the U.S. National Weather Service, said on Twitter.

The heaviest bands of snowfall skirted east of the city, blanketing eastern Long Island and parts of Connecticut with more than a foot of snow. But accumulations in New York and New Jersey ranged from two to six inches as of early Tuesday morning. Forecasts had called for between 20 and 30 inches of snow in the city.

MORE: Why the Big Blizzard Fizzled in New York

“The storm in general, I think it’s fair to say, was less destructive than predicted so far,” New York Gov. Andrew Cuomo during a Tuesday morning press briefing. Cuomo announced a resumption of subway service by 9 a.m. ET, but urged commuters to stay home and away from “hazardous” roads. “If you don’t have to travel today, you really don’t want to be traveling today.”

“The heaviest snows have struggled to move west of the Hudson River,” the National Weather Service announced on its New York State Facebook page, adding, “the science of forecasting storms, while continually improving, still can be subject to error.”

New Jersey lifted a partial travel ban over state roads by 7 a.m., coordinating with the state of New York, which also lifted travel bans on city and upstate county roads. Connecticut was set to lift a statewide travel ban at 2 p.m., but Gov. Dan Malloy encouraged people to still “limit travel and use common sense while driving.” 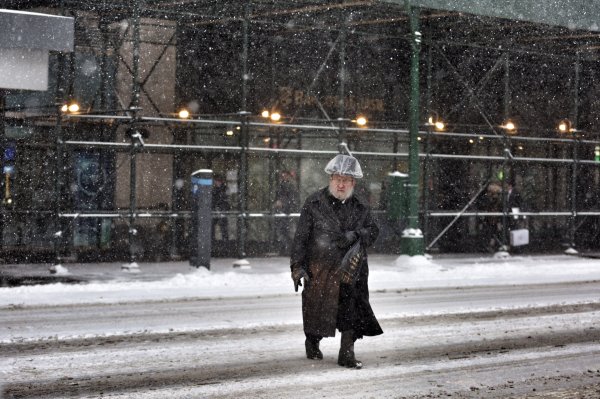 Why the Big Blizzard Fizzled in New York
Next Up: Editor's Pick