Monday was a bad day for Evgeny “Zhenya” Buryakov, the alleged spy arrested in the Bronx for his role as a deep cover case officer in a Russian ring targeting female university students, business consultants and the operations of the bank at which Buryakov worked. But it was an even worse day for his alleged spymasters, two Russian officials operating under diplomatic immunity who come across as sloppy, bureaucratic buffoons in the Justice department complaint detailing the alleged conspiracy.

Buryakov nominally faces up to 20 years in prison on two charges of acting as a foreign agent. But practically speaking he will only have to cool his heels in a U.S. jail for a few weeks or months until officials in Moscow find a suitable American operative to arrest and trade for him. Thereafter, he’ll likely return to Moscow, and given what appears to be fairly entrepreneurial work as a deep cover agent in New York, he can probably expect to thrive in the public or private sector there.

His two bosses, on the other hand, broke basic tradecraft rules and exposed Buryakov’s work, as well as other intelligence efforts by the Russian espionage services, according to the complaint. Both have already left the U.S. for other assignments. And while the days of banishment to Siberia for failed spy-handlers are long gone, the two at least face a grim professional future of pushing paper in the bowels of the Russian Foreign Intelligence Service in Moscow.

Buryakov was a particularly valuable asset known as a “NOC,” operating under “non-official cover,” according to the complaint. A regular employee of a bank in New York, with no diplomatic immunity, he was able to gain valuable economic intelligence that a Russian government official—even one pretending to be a normal diplomat not a spy—wouldn’t have easy access to, according to the complaint. Placing and maintaining NOC’s is one of the more challenging aspects of running spies in a foreign country.

But Igor Sporyshev, a Russian Trade Representative in New York, and Victor Podobnyy, an attaché to the Russian United Nations mission, managed to expose Buryakov by calling him on an open phone line and by using his true name in a conversation in the New York offices of the Russian Foreign Intelligence Services (SVR) which were apparently being bugged by the FBI’s counterintelligence division.

Even before they outed their deep cover man, the two come across as buffoons in the complaint. In April 2013, the Justice department recounts, Podobnyy tells Sporyshev how disappointed he is at how boring the life a spy runner is, contrasting his life with a James Bond movie. Sporyshev responds that he always “thought that at least I would go abroad with a different passport,” according to the complaint.

The two men also discussed their attempts to recruit young women from a financial consulting firm and from a major university in New York, which a Justice Department official identifies as New York University. Sporyshev blusters that “in order to be close you either need to —k them or use other levers to influence them to execute my requests. So when you tell me about girls, in my experience, it’s very rare that something workable will come of it,” according to the complaint.

But it is in the exposure of the NOC Buryakov that Sporyshev and Podobnyy really shine. First, in May 2013, Sporyshev calls up Buryakov over a phone that was being monitored by the FBI and announces that he needs his help. Sporyshev says a Russian news organization acting on behest of the SVR wants to know what questions to ask a source about the New York Stock Exchange, the complaint claims. Sporyshev says he needs the questions in 15 minutes.

Twenty minutes later, according to the complaint, Buryakov calls back and tells Sporyshev the news organization should ask about how Exchange Traded Funds could be “mechanisms of use for destabilization of markets” (Buryakov has to correct Sporyshev who thinks he says “stabilization”). Buryakov also points Sporyshev towards the issue of automated trading robots, and says he could also ask about the interest of NYSE participants in products tied to the Russia.

Buryakov later shows himself to be entrepreneurial in his efforts. In November 2012 and March 2013, he attended conferences in a foreign country for the bank he worked for, and gathered intelligence about a potential airplane deal that could benefit Russia, the Justice department alleges. The deal was potentially a good one for Russia as it would bring jobs and technology, but unions in the company’s home country were resisting, the complaint says.

Buryakov drafted and submitted to Sporyshev and Pobodnyy a proposal recommending that the SVR’s “Active Measures Directorate” take steps “towards pressuring the unions and securing from the company a solution that is beneficial to us,” according a recording the FBI made of a conversation between the two spy-runners in the SVR offices in late May 2013.

Having a deep cover operative who is capable of getting inside a potential trade deal and is clever enough to see how it might be positively influenced is, despite what movie watchers like Sporyshev and Pobodnyy might think, an unusually fortunate set of circumstances for a spy service. But the bureaucratic Pobodnyy hesitates, according to the complaint, because the action is taking place in the country Buryakov visited for the conference:

Ultimately, Buryakov’s aggressiveness tripped him up. In the summer of 2014, the complaint alleges, Buryakov met a wealthy investor looking to develop casinos in Russia and willing to trade U.S. Treasury documents he’d obtained from a friend in exchange for help setting up a deal—a plot-line worthy of “American Hustle.” The investor was in fact an undercover FBI agent.

But if Buryakov was naïve, his handlers didn’t do much to protect him. Sporyshev said it sounded like “some sort of a set up. Trap of some sort.” But rather than warning Buryakov off, Sporyshev told him to go ahead and meet an associate of the “investor”: “You will look and decide for yourself.” Later in the summer, Buryakov allegedly received documents purporting to be from the U.S. Treasury regarding sanctions against Russia and passed them along to Sporyshev at a clandestine meeting.

Acting as a foreign agent without registering with the Justice department is a crime in the U.S., as is receiving coded documents and passing them along. And now Buryakov is under arrest. 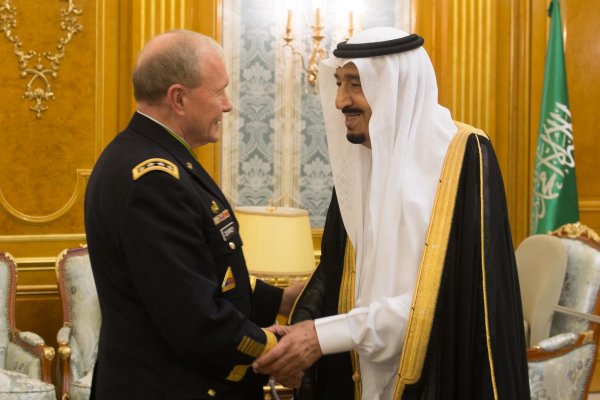 Why the Pentagon Is Honoring the Late Saudi King
Next Up: Editor's Pick