Why the Pentagon Is Honoring the Late Saudi King

You can get whiplash inside the Pentagon. The last time the Defense Department achieved notoriety as a platform for views on Saudi Arabia was in 2002, between the U.S. invasions of Afghanistan and Iraq. That’s when a Rand Corp. analyst told a high-level panel behind closed doors that the kingdom was “active at every level of the terror chain, from planners to financiers, from cadre to foot soldier, from ideologist to cheerleader.” Washington, he said, should declare the Saudis the enemy and threaten to take over the oil wells if they didn’t do more to combat Islamist terrorists (the briefing was 10 months after the 9/11 attacks, in which 15 of the 19 terrorists were Saudi).

The Pentagon quickly distanced itself from Laurent Murawiec’s presentation to the Defense Policy Board. Secretary of State Colin Powell called the Saudi Foreign Minister to apologize. Murawiec, who made the presentation on his own time, resigned from Rand several weeks later.

On Monday, the top U.S. military leader, Army General Martin Dempsey, announced the Pentagon would be conducting a “research and essay competition” to honor Saudi King Abdullah, who died Jan. 23 at 90, as “a man of remarkable character and courage.”

“I wonder if Raif Badawi, the Saudi blogger who has been sentenced to 10 years in jail and 1,000 lashes for postings critical of Islam and the House of Saud is eligible to enter?” one posted on Dempsey’s Facebook page. “That’s an essay that might be worth reading.”

Foreign-policy experts questioned Abdullah’s reputation as a King who pushed for change in Saudi society. “There were persistent stories alleging that Abdullah was a reformer, but no one could ever articulate for me what he actually stood for and wanted. It seemed to me that he wanted what everyone in the Saudi royal family wants — stability and business as usual,” Steven A. Cook, an Arab expert at the Council on Foreign Relations, wrote Monday. “There is no denying that the Saudis under Abdullah had an extremism problem about which they were apparently in abject denial until terrorists started targeting them in 2003. More recently, Abdullah oversaw the beheading of eighty-seven individuals in 2014, mostly poor guest workers that no one cares about. So far this year, which is only twenty-six days old, Saudi executioners have separated ten more people from their heads.”

And you don’t have to rely on ivory-tower scholars. Then-Secretary of State Hillary Clinton said in a secret 2009 memo that Saudi Arabia is an ATM for terrorism. “Donors in Saudi Arabia constitute the most significant source of funding to Sunni terrorist groups worldwide,” she wrote, adding that the King and his government had been reluctant to shut down such cash pipelines.

This is the challenge of the 21st century world. With the end of the Cold War, forces have been unleashed that have toppled dictators along an arc of crisis from Libya to Egypt to Iraq. Saudi Arabia’s monarchy is the key to U.S. policy in the region, and it, too, is a non-democracy that hardly squares with U.S. ideals.

The U.S.-Saudi relationship boils down to quid-pro-petroleum: We need their oil, and they need U.S. military protection. The Saudi military’s F-15 fighters, AWACS aircraft, Patriot missiles, M-1 tanks, Bradley fighting Vehicles and AH-64 Apache helicopter gunships are all U.S.-built and maintained. Absent continued U.S. support — spare parts, upgrades, software — for such an arsenal, Saudi Arabia would find itself defenseless in a matter of months. Shi’ite Iran’s growing clout in the region, just across the Persian Gulf from the kingdom, unnerves the Sunni Saudis.

Dempsey was stationed in Riyadh, a month after earning his first star as a brigadier general, when Murawiec gave his infamous Pentagon briefing. He was overseeing 350 U.S. troops and civilians, and more than 1,000 contractors, as chief of the Saudi Arabian National Guard Modernization Program. The commander of the Saudi Arabia National Guard: none other than Abdullah, who would become King two years after Dempsey left Saudi Arabia.

“In my job to train and advise his military forces, and in our relationship since, I found the King to be a man of remarkable character and courage,” Dempsey posted on his Facebook page Friday. “He will be truly missed and his loss will be felt by his country and ours.”

But don’t confuse the Saudi Arabia National Guard run by the future King, and trained by Dempsey, with the U.S. military’s National Guard.

That other, “official” army’s rule, Wafe continued, is “to protect the country from external threats, and to serve as a balance against SANG, should the royal family decide to eliminate some clan hostile to the King’s rule.”

Plainly, Dempsey and his troops had their hands full training the Saudi national guard, and balancing its capabilities against those of the Royal Saudi Land Forces.

Wafe wrote of the challenges associated with training SANG’s non-commissioned officers — the sergeants and others that are the backbone of the U.S. military — to fight:

Wafe, who as an enlisted soldier was more likely than an officer to call ’em the way he saw them, issued guidelines for those U.S. troops who would follow in his footsteps to train SANG forces:

O.K., so the Saudi monarchy is an archaic autocracy with a U.S.-supplied military dedicated to keeping it in power. Bottom line, as Donald Rumsfeld might have said: You defend your oil with the army you have, not the one you wish you had. 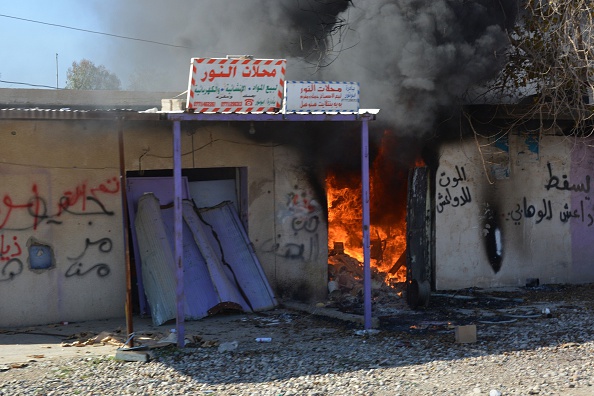 The U.S. Needs a New Yardstick for a New Kind of War
Next Up: Editor's Pick