Almost as soon as California Attorney General Kamala Harris announced her candidacy for the U.S. Senate in 2016, Democratic power brokers from Sacramento to Washington lined up to endorse her. Meanwhile, potential challengers including billionaire environmentalist Tom Steyer and the state’s lieutenant governor, Gavin Newsom, said they wouldn’t run for the seat being vacated by retiring Sen. Barbara Boxer. But one faction in the Democratic establishment wasn’t quite ready for a Harris coronation. This group, made up of Latino political leaders, was electrified by another potential choice: former Los Angeles Mayor Antonio Villaraigosa.

Villaraigosa said he was “seriously a considering” a run on Jan. 10, and political consultants who have spoken with him since say it’s likely he will jump in. Should Villaraigosa run and win, he would become the first Latino senator from California and could be the only Mexican-American in the chamber, making him a key player on issues such as immigration. And given the powerful roles California senators tend to play inside the Beltway and the attention this race is expected to attract, the winner is likely to arrive in Washington with a high national profile.

But Villaraigosa faces tough questions as he decides whether to take on Harris, a popular attorney general with a broad fundraising network, including whether he has enough appeal outside his home territory of Southern California, and if voters will understand his decision to leave public service in 2012 to enter the private sector.

Villaraigosa chaired the 2012 Democratic National Convention and has the connections to raise the huge sums needed to run for statewide office in California, which has some of the most expensive media markets in the country. “It could easily be a $15 million primary,” says Rose Kapolczynski, a Los Angeles-based Democratic consultant and longtime campaign manager for Boxer. Here, Villaraigosa and Harris would be courting many of the same wealthy contributors. “There are only so many progressive donors in California and Kamala Harris and Antonio Villaraigosa share many of the same donors from their past races,” says Kapolczynski. (And thanks to California’s overwhelming Democratic slant and unusual election rules, which put the top two vote getters in the primary on the general election ballot, regardless of party, Villaraigosa and Harris could end up running against each other again in the fall.)

In addition to two high-profile terms as mayor of Los Angeles, Villaraigosa is a former speaker of the state Assembly and is relatively well-known throughout the state, particularly among Latino voters. “He’s going to have to be taken seriously,” says Tom Hogen-Esch, a political science professor at California State University, Northridge. “He’s got a long Rolodex and a long history in state politics and he can still command the stage.”

Harris, while popular among Democratic leaders, may have less name recognition outside the Bay Area. “I don’t think very many people know much about her,” Hogen-Esch says. “She’ll have to raise a lot of money to introduce herself to voters.”

As he contemplates a run, Villaraigosa has been calling and meeting with Democratic strategists, leaders and donors throughout the state. “He routinely reaches out to a wide circle to get advice about policy and politics. I’m not at all surprised he is calling dozens or hundreds of people,” says Kapolczynski “Some of these calls might be asking for advice, some might be taking the donors’ temperature.”

But despite his traction with voters and donors, Villaraigosa is not without flaws and vulnerabilities—some of them personal. During his first term as mayor, Villaraigosa had an affair with a Los Angeles television reporter and separated from his wife. They later divorced. The incident came years after Villaraigosa admitted to an earlier affair. Villaraigosa has also spent his recent time out of office consulting for for-profit companies, including Herbalife, which a Latino civil rights group has accused of misleading those who sell the company’s products. But the biggest downside of Villaraigosa’s time out of office may be simply that he’s been out of the news and out of the minds of voters. Harris, meanwhile, was just re-elected to statewide office in a landslide.

And beyond Harris and Villaraigosa, other viable candidates are also reportedly considering entering the race, including U.S. Reps. Xavier Becerra, Adam Schiff and Loretta Sanchez. For Villaraigosa, the decision is weighty. Losing the race would likely prevent him from running for governor in 2018 or, should Sen. Dianne Feinstein, 81, choose to retire, seeking the state’s other Senate seat that same year.

“When you lose,” says Hogen-Esch, “you get some chinks in your armor.” 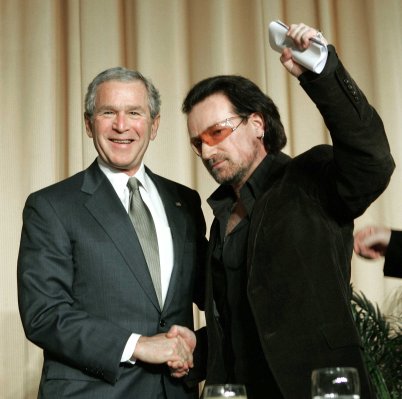 Strange Bedfellows at the National Prayer Breakfast
Next Up: Editor's Pick