It would be hard to find a place in Europe that feels more cozily insulated from the troubles of the Greek economy than the marbled halls of KaDeWe, the posh department store in the center of Berlin. Its immaculate champagne bar and moneyed clientele practically ooze with the kind of wealth that Greece and other members of the European Union have struggled to regain since the global financial crisis hit five years ago. But as the electoral upset in Greece reminded Europe over the weekend, German fortunes and Greek misfortunes are deeply intertwined.

“We put so much money there, so much money, and for what?” asked Mark Schaefer, a retired German insurance executive, as he waited for his son to join him on Monday for lunch in the culinary hall of KaDeWe.

It is a common question for Germans these days. Since 2010, their country has shouldered the biggest share of the roughly $270-billion bailout program meant to save Greece from economic ruin. But the left-wing Syriza party that won Sunday’s elections in Greece has asked for some of its bailout loans to be forgiven. The new Greek Prime Minister, Syriza leader Alexis Tsipras, is sure to push for a new round of negotiations over the terms of those loans in the coming months, and they will again test the patience of German taxpayers as well as the solidarity and stability of the shared European market.

“I think maybe it’s time for a break-up,” says Kathrin Scheel, who was browsing the cosmetics section of KaDeWe on Monday. But the laugh that accompanied her remark was perhaps as telling as the sentiment behind it. Frustrated as Germans are with their Greek debtors, most of them do not seriously want to risk a break-up of the Eurozone that unites them with Greece and 17 other members of the European Union. They have, after all, profited enormously from their shared currency, and a Greek exit could put that system in jeopardy.

According to the Bertelsmann Foundation, a leading German think tank, the common currency has added an average of about 37 billion euros (or nearly $42 billion) to the size of Germany’s economy every year since its creation in 1992. Through increased trade and investment, that comes to an average of 450 euros in wealth per person per year in Germany, says Henning vom Stein, the head of Bertelsmann’s office in Brussels. “Germany has the biggest interest in keeping the single market together and making it function more dynamically,” he says in an email to TIME.

So it is no surprise that German leaders have shown a grudging willingness to compromise with a Syriza-led government in Greece. “Since the beginning of the crisis, the goal has been to stabilize the whole of the Eurozone, including Greece, and that remains the goal of our work,” the spokesman for the German government, Steffen Siebert, said on Monday.

But German Chancellor Angela Merkel will be under intense pressure from her own electorate not to give in to Tsipras’ demands for a reduction in Greek debt. Her popularity is based in large part on her handling of the crisis in the Eurozone, and any major concessions to Greece could dent her approval ratings, which hit a high of over 70% in August. That much seemed clear from the tone of the German press on Monday. The country’s most popular daily, Bild, mused on its website about how much the “Greek chaos” would cost German taxpayers, and called Tsipras a “Euro-horror” on its front page, asking: “Should Europe really tremble before the new Greek leader?”

But judging by the market reaction on Monday, the answer is probably not. European traders did not respond to the Greek election with a sell-off, and stocks remained flat at the end of the day, as did the value of the euro after a drop in early trading. So investors seem to believe that Greece and its creditors are likely to find a compromise to keep the Eurozone intact.

Somewhat harder to gauge are the limits of German patience. Asked how much more his government should do to help the struggling Greek economy, Schaefer, the retiree, answered: “It is already too much.” Rich Berliners are not the only ones with that opinion. In a nationwide poll published this month by the German state television network ARD, 61% of respondents said they want Greece to be forced out of the Eurozone if it does not meet the conditions of its loans. So as much as Germans have benefited from the common currency, they may not give their Chancellor much slack in negotiating to preserve it. 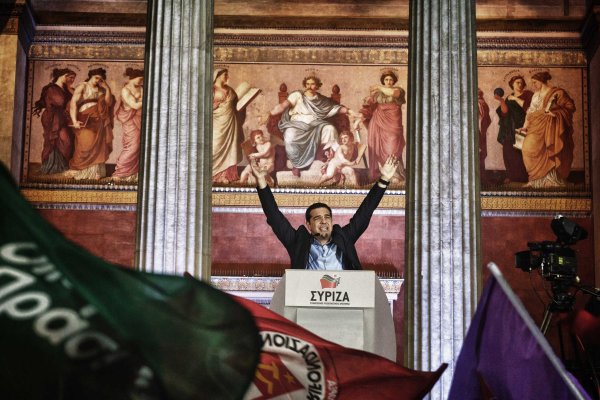