The 7 Best Gadgets for Ski Freaks

Skiing and snowboarding have both come a long way since the first time people strapped planks to their feet and went rocketing down the mountain. Every season there seems to be more advancements in gear, from the shaping and makeup of the skis and boards themselves, to the release of new bindings and other products.

But these snow accessories go above and beyond the powder, letting you get the most out of modern technology while conquering the slopes. And with a massive snowstorm barreling down on the east coast this week, there’s plenty of fresh powder to try out these new toys.

The action camera that single-handedly turned extreme sports into high-definition entertainment, GoPro’s latest version is one of the most advanced video gadgets going. Just a bit fatter than a matchbox, the $499 head-mounted shooter can capture 4K video and 12 megapixel resolution photos at a 30 frame per second burst.

Complete with built-in Wi-Fi and Bluetooth, it’s able to upload your last run to the web before you even push off the chairlift for your next descent.

Hustling to the mountain to make fresh tracks in the morning and staying until they shut the lifts down in the evening can make for a long day on the slopes. If your personal batteries don’t wear out, then your phone’s certainly will.

This $49 battery pack pulls triple duty, producing enough juice to charge roughly half an iPhone, making heat to keep your hands warm, and lighting up to help you find your way back to the car in the dark. Whether you ski or not, it’s a good device to keep on hand.

There are few bigger hassles than trying to check the time when you’re on the mountain. Whether it’s pulling up your sleeve to get at your watch, or pulling out your phone and risk it falling in the snow, it’s not a good situation. The $500 Suunto Ambit3 Peak sport watch is the perfect thing to sling over your wrist, not only telling the time but connecting to a heart rate monitor and a family of smartphone apps that track your activity, map your location, count your burned calories and more. And the watch’s Movescount app also connects you to a community of other Suunto wearers, letting you compare your workouts and adventures.

Gloves have long been an ever-improving element of ski technology, but the $120 Beartek Snowsports have the upper hand on every model that’s come before. With the ability to insert either a Bluetooth or Wi-Fi module into them, these moisture-resistant mitts double as a controller for your digital music player or GoPro camera. By pressing certain finger pads together, wearers can play, pause, record, fast-forward and rewind, all without pulling out their devices. It’s the most technologically advanced hand-cessory since the old Nintendo Power Glove — and that’s saying something.

Take Google Glass, add Oakley lenses, and you’ve got the Airwave 1.5, smart snow goggles that look as good on the outside as they do on the inside. With a small heads-up-display on the bottom of the field of view that displays everything from speed, elevation, and jump analytics to music information, your friends’ locations, and messages relayed from your smartphone, this $649 eyepiece turns skiers into the borg of the berg. And its switch-lock lens swapping ability gives it the ability to shine in sun or fog.

While not technically a ski product, anyone who’s ever tackled a mountain while carrying phone, a camera, a pack of gum, some chapstick, hand warmers, and all the rest will love the 13-pocket spread of this hoodie. Made of micro fleece, it’s better suited for spring skiing than blizzard conditions, but the $105 sweatshirt does have a series of interior cord channels, allowing phones and cameras in their own pockets to plug into portable batteries in another pocket. Just be careful if you fall with all your gadgets strapped to you, because that could make for a heck of a yard sale.

Not yet for sale, but definitely ready for ogling, the Forcite Alpine ski helmet is the ultimate in connected sports gear. With integrated Bluetooth and Wi-Fi, it syncs to smartphones to pipe in music and phone calls to the wearer. Foglights built into the casing light the slopes, which is doubly important when the Forcite’s 1080p camera is capturing your descent down the mountain. Motion and impact sensors keep track of safety and activity, while GPS capabilities make sure you can keep track of the trails you’ve conquered. All powered by a battery that lasts between six and eight hours, this futuristic helmet will last as long as you can, if it’s ever released. 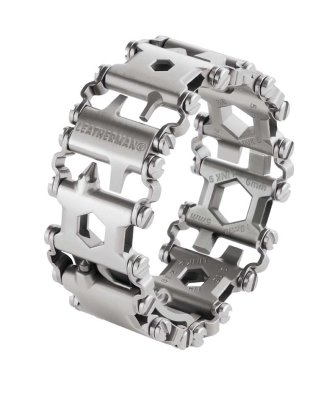 This Is Your Dad's Next Birthday Present
Next Up: Editor's Pick