Taiwanese lawmakers approved the “Child and Youth Welfare and Protection Act,” which expanded existing legislation to allow the government to fine parents of children under the age of 18 who are using electronic devices for extended periods of times. The law follows similar measures in China and South Korea that aims to limit screen time to a healthy level.

Citing health concerns, the Taiwanese government can fine parents up to $1595 ($50,000 Taiwanese Dollars) if their child’s use of electronic devices “exceeds a reasonable time,” according to Taiwan’s ETTV (and Google Translate). Under the new law, excess screen time is now considered to be the equivalent of vices like smoking, drinking, using drugs, and chewing betel nuts.

The new amendment doesn’t spell out exactly what time limits should be set on electronic devices (which are called 3C products in Taiwan), but says parents can be held liable if their children stare at screens for so long that its causes them to become ill, either physically or mentally, as Kotaku reports. While that should be O.K. for children angling for 15 more minutes of Minecraft, it’s unclear what is considered “reasonable” under the law— or how the Taiwanese government plans to regulate or monitor screen time.

According to Kotaku, so far the response to the legislation has been negative—which it undoubtedly would be in the U.S. as well—with Taiwanese citizens citing privacy concerns.

There are some parents however, who might welcome a little help prying their children’s eyes off screens. Studies have shown that excessive media use can lead to attention issues, behavioral problems, learning difficulties, sleep disorders, and obesity. Too much time online may even inhibit a child’s ability to recognize emotions, according to a study by the University of California, Los Angeles. Despite these risks, as technology increasingly becomes a part of modern life, children are spending more and more time in front of screens. A recent study found that in the U.S. 8-year-olds spend an average of eight hours a day with some form of media, with teenagers often clocking in at 11 hour a day of media consumption. A 2013 study by Nickelodeon found that kids watch an average of 35 hours a week of television.

So how much is too much screen time? According to the American Academy of Pediatrics, children under the age of two should have no screen time at all. Entertainment screen time should be limited to two hours a day for children ages 3-18, and that should be “high-quality content.” Common Sense Media, a San Francisco-based non-profit, has suggestions for setting up a “media diet” that works for your family.

TIME family subscribers can read our in-depth report on Raising the Screen Generation here. And don’t forget to sign up for Time’s free parenting newsletter. 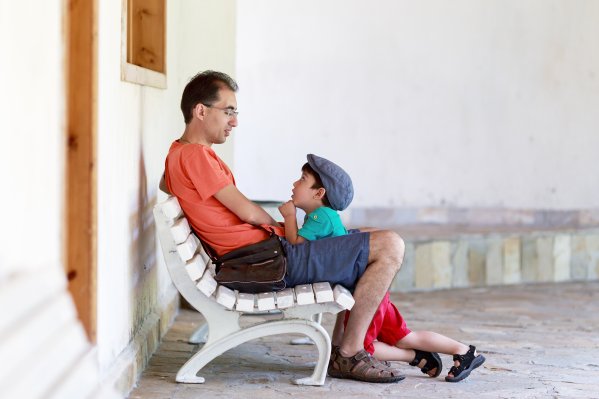 6 Sneaky but Scientific Ways to Help Kids Learn
Next Up: Editor's Pick