Timothy Olyphant on Justified's Finale: I Don't Know How the Show Will End

Timothy Olyphant has played trigger-happy U.S. Marshal Raylan Givens on the FX drama Justified for five seasons. The show’s sixth and final season kicked off last week; as the story of Marshall Givens draws to a close, even Olyphant, who has become indelibly intertwined with the terse, Stetson-wearing modern-day sheriff in the eyes of fans, doesn’t know how the show will end. He’s leaving Raylan’s fate in the hands of the show’s longtime show runner, Graham Yost. “I trust him to know what he’s doing,” Olyphant said in an interview with TIME.

With just a few more episodes of the final season to shoot, the actor spoke to TIME about what’s next for Raylan — and for him.

TIME: What prompted you and Graham to end the show after six seasons?

Timothy Olyphant: It was just a mutual decision to go out now. It seemed like the right time.

How has the final season been going for you?

Good. No one has gone crazy, everyone’s been pretty well behaved. So far so good!

What’s it like as an actor going into the final season of a show?

It’s nice to know that it’s coming to an end. Usually when things come to an end, I’m not the first to know about it.

I guess coming out of an experience like Deadwood, it’s nice to have some warning.

Yeah. That one is a good example, but there are many others.

Speaking of Deadwood, one of your co-stars has joined Justified this season.

The great Garret Dillahunt. He’s one of the good ones. It’s always good to see old friends — and it’s even better when they are really good at what they do.

That’s a good question. I think what’s happening is that I thought I knew what was going to happen, but now Graham is waffling. So we’ll let him waffle and see if he comes back to what we had talked about or if he wants to take it in a different direction.

Are you going to miss Raylan?

No, there’s no missing Raylan! I’m going to miss the people that I work with. I mean, I know what you mean by that question, but no. He’s not a real guy.

He’s also not really a good guy. He’s killed a lot of people and, despite the title, they don’t all seem justified.

Well, it’s important to remember that it’s a fantasy. You want to look at it through the same looking glass as you would James Bond. There’s a good chance that guy wouldn’t keep his job either, if you added it all up.

Do you think Raylan is going to be fired?

I thought I knew how we were ending the show, but apparently the commitment has not been made, so I don’t know. There’s a chance that I’ll end up on set and people will say, ‘Oh man, I’m so sorry.’ And I won’t know what they’re talking about.

This season it feels like everyone is out to get Boyd, and I kind of like Boyd, so I’m having a hard time getting on-board with this plot.

I’ve been saying the same thing for years now. If we’re all going to go after Boyd, the question is how do we want the audience to feel about that? Strange little things happen along the way and you can make a case now that Boyd is really the hero at this point. That’s an interesting way to go.

If you end up rooting for Boyd, the show becomes much darker in a way.

Yes, but he’s become less morally bankrupt as he was when we first met him. Wouldn’t you agree? What was the Boyd you met when we started?

Right, and you kind of liked him, didn’t you? But now he’s not so much that guy. He’s gone through a metamorphosis. He’s something else. Do you still think of him that way? No.

No, which is why I’m struggling with this season a bit.

But Raylan hasn’t evolved as much; he’s stayed very true.

You bring up some very valid points. You should come visit the writers’ room with me. It’s a fair question, but a better question for Graham.

As you approach the finale, are you nervous at all?

No, I’m not nervous. I’m looking forward to seeing how it all goes down. I’m just like everybody else, just trying to get through the day.

Are you and Raylan alike at all?

Not at all! I’m wearing flip-flops as we speak.

So you’re not a method actor who has to live as the character?

There is no character. There’s just lines on a page.

Are you pleased with the work you’ve done over the last six years?

You know, I go to sleep and the pillow’s pretty cool, because I feel like it’s about the best I can do.

After playing Raylan for six years, what do you want to do next?

I will be unemployed. I will need to find work.

Would you go consider going back to the theater?

Going back to the theater has great appeal. Maybe I could do something out here in L.A. That’s a great idea. It doesn’t pay well, though. I don’t know what they’ve told you, but it really doesn’t pay.

At the end of Battlestar Galactica, a lot of actors said they brought home souvenirs like notepads with the corners cut off. Are you going to take a Stetson home with you?

No. I suppose if I was on the Battlestar Galactica set, I’d steal stuff, too! On the Justified set I’m just going to let things go where they need to go. 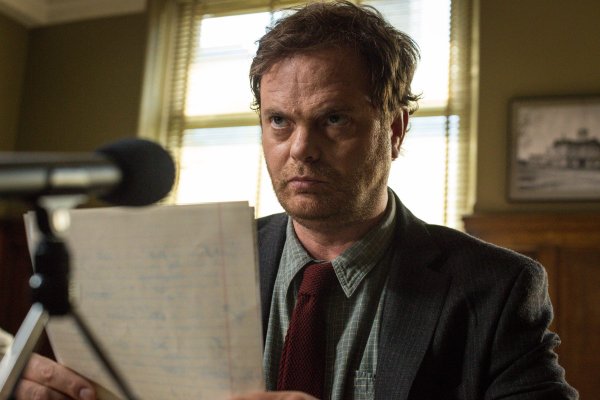 Rainn Wilson: In Defense of the Anti-Hero and Cracking Offensive Jokes
Next Up: Editor's Pick