Here's Why You Should Binge Watch The Fall During the Blizzard

If you’re stuck inside during the upcoming snowstorm and counting the days until 50 Shades of Gray comes out in theaters on Feb. 13, The Fall will give you a early taste of Jamie Dornan in fetish-mode. And while nobody knows where 50 Shades of Gray will fall on the feminist spectrum (get ready for a thousand thinkpieces about exactly that), there’s little doubt that The Fall is great for women.

The Fall is a 2013 BBC hit crime drama that only recently became available for viewing on Netflix in full, which is why you’re starting to hear more about it now. It stars your future crush Jamie Dornan as a serial killer and The X Files’ Gillian Anderson as the detective charged with catching him. And even though it’s a show about stalking and killing women, it’s as much about female vengeance as male perversion.

Detective Superintendent Stella Gibson, played by an icy-hot Anderson, has been brought to Belfast by the top brass to help solve a high-profile murder, which she quickly realizes is linked to several other murders of women in the area; now, she’s on the hunt for a serial killer. She’s brilliant, unflappable, and sexually liberated — she makes a habit of selecting male co-workers for one-night-stands, then quickly discarding them. When a male colleague questions her about her sexual habits, she coolly points out his double standard by comparing his alarm to the ease with which he handles men doing the same thing. “Woman f—s man. Woman, subject: man, object,” she says. “That’s not so comfortable for you, is it?”

Gibson pursues the killer with a relentless psychological intensity; she goes so far as to inhabit the bodies of the victims, from lying in their deathbeds to painting her fingernails the same color of red the killer chose for his post-mortem manicures. But she’s just as deliberate about correcting the deeply flawed rhetoric surrounding crimes against female victims. She insists the department not refer to the victims as “professional” (because it’s too much of a “value judgment”) and refuses to describe the victims as “innocent.” “What if he kills a prostitute next?” she asks. “Or a woman walking home drunk? Will they be in some way less innocent, therefore less deserving? Culpable?”

This awareness of the way police describe female victims points to a meta-insight about the way the media depicts female characters like her own. “The media loves to divide women into virgins and vamps, angels or whores,” she tells a subordinate. “Let’s not encourage them.” She’s talking about the journalists covering the case — but she could just as easily be talking about a television audience that’s only recently getting used to seeing female characters like her.

Dornan’s character, Paul Spector, hunts successful career-oriented brunettes who live alone. At first you think his super-hot face is the most surprising thing about him (serial killers are supposed to be freaky-looking — sorry, Ted Bundy); then, the show reveals that he’s a lot more complicated than he seems. He’s a husband, a grief counselor, and a father to a young daughter whom he seems to adore. Spector isn’t much of a talker — he lurks, stalks, and seems to say as little as possible (in one particularly chilling conversation with his boss, he imitates everything he says like a petulant child). And he’s obsessed with the psychological torture and murder of his targets, who have all achieved more power and success in the world than he has. In one meeting discussing his motivations, a female cop observes that he “hates women who occupy powerful positions,” to which a male colleague responds, “Don’t we all?”

But a strong female detective on TV is nothing new: just ask Law & Order SVU’s Olivia Benson, The Killing’s Sarah Linden, or Top of the Lake’s Robin Griffin. What’s most fascinating about The Fall is the way violence against women seems to darken the world for all the female characters — not just the victims. Spector’s daughter Olivia begins to have dreams about dead naked women after he gives her a necklace he stole from one of his victims. She starts making drawings of dead women at school, even though she doesn’t know what her father does at night. The children’s babysitter Katie finds a lock of a victim’s hair, which leads to a disastrous pseudo-sexual encounter with Spector. Spector’s wife perjures herself to cover for him without knowing the truth.

Whether they know it or not, all of the women in the show are affected by the murders. It’s a potent truth: where any women are targeted, all women are in danger. 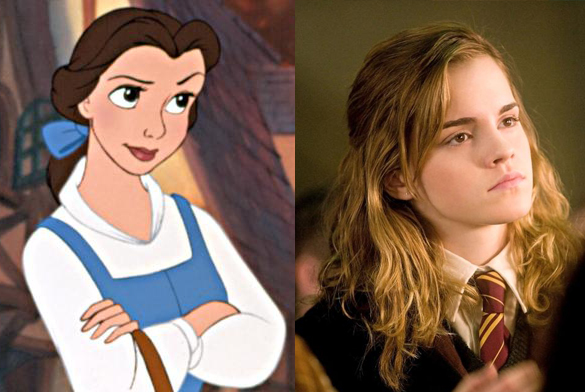 10 Things Beauty and the Beast's Belle and Harry Potter's Hermione Have in Common
Next Up: Editor's Pick