As campaign season ramps up ahead of Nigerian general elections on February 14th, President Goodluck Jonathan has sought to downplay an insurgency in the country’s northeast that has been raging almost as long as he has been in power. The rise of Boko Haram, a Nigeria-based militant Islamist group best known for vicious attacks on military targets and its penchant for kidnapping women and girls and conscripting men and boys, has stymied Jonathan’s government since the former vice-president ascended to the presidency in 2010.

The insurgency has killed an estimated 11,000, according to the Council on Foreign Relation’s Nigeria Security Tracker. Unable to defeat it, the Jonathan campaign has chosen to all but ignore it as the president asks his people for an additional four-year term. But that strategy backfired on Saturday night, as militants swept into the strategic northern capital of Maiduguri just hours after Jonathan stumped for support from city residents.

The militants, who reportedly infiltrated the city of two million disguised as travelers on local buses, laid siege to key military installations and battled into Sunday. The Nigerian army eventually beat them back, but the fact that they were able to penetrate the city undetected raises questions about the military’s ability to defeat the movement, and, as the country’s Commander-in-Chief, Jonathan’s commitment to the fight.

Even as the insurgents retreated in Maiduguri, others looted, killed and abducted residents in a string of attacks on unguarded villages about 200 kilometers away, according to local authorities. As with previous attacks, such as an assault on a military base and several nearby villages that started Jan. 3 and killed scores, the government response has been muted.

Amnesty International, which has been closely documenting Boko Haram’s expansion, warned of a looming humanitarian crisis in a statement released Sunday, noting that the capital had already seen a massive influx of rural residents fleeing the violence over the past several months. “These ongoing attacks by Boko Haram are significant and grim news. We believe hundreds of thousands of civilians are now at grave risk,” said Africa Director Netsanet Belay. “People in and around Maiduguri need immediate protection. If the military doesn’t succeed in stopping Boko Haram’s advance they may be trapped with nowhere else to turn. The government’s failure to protect residents of Maiduguri at this time could lead to a disastrous humanitarian crisis.”

Boko Haram’s increasing boldness comes at a delicate time for Nigeria, which is just three weeks away from an election that promises to be the closest in the country’s short democratic history. Jonathan is up against former military dictator Muhammadu Buhari, who has made security the main issue in his campaign platform. Elections in Nigeria are invariably accompanied by violence — the 2011 elections saw some 800 killed in post-polling fighting when Buhari lost to Jonathan — and fears are rife that Boko Haram could take advantage of the instability to sow further discord, or advance while the security services are distracted.

The United States has expressed concerns that the elections could usher in a new wave of violence, particularly if allegations of rigging by either side are widespread. U.S. Secretary of State John Kerry was in Lagos on Sunday to reiterate the U.S.’s desire to see clean elections. “This will be the largest democratic election on the continent,” Kerry said at a press conference following meetings with the two main candidates. “Given the stakes, it’s absolutely critical that these elections be conducted peacefully — that they are credible, transparent and accountable.” But obstacles are rife: some 25 million registered voters have yet to receive their biometric voter identity cards. There is not yet a system in place for an estimated one million internally displaced to cast their votes. And the ongoing violence in the northeast could prevent voters in what is traditionally a Buhari stronghold from coming to the polls.

On Jan. 22, Jonathan’s national security adviser Sambo Dasuki suggested at a meeting of the Royal Institute of International Affairs at London’s Chatham House that the elections be postponed, but such a delay risks prolonging the instability and prevents a unified response against Boko Haram. On the same day, government spokesman Mike Omeri announced that Nigeria was considering bringing home some 3,000 soldiers deployed in international peacekeeping missions elsewhere in Africa to help secure the elections and combat the insurgency. But the military’s inability to combat Boko Haram has less to do with numbers than a longstanding history of alleged corruption within the leadership ranks, a lack of adequate weaponry and logistical supplies, unpaid salaries and poor training, according to several military analysts and frustrated soldiers. Dasuki, in his Jan. 22 Chatham House comments, defended the military leadership and instead blamed cowardice among the troops for Boko Haram’s advance. “We have people who use every excuse in this world not to fight. We’ve had a lot of people who we believe joined because they wanted a job, not because they wanted a career in the military. And it’s most of them who are running away and telling stories,” he said.

While in Lagos, Kerry reiterated the U.S.’s continued backing for Nigeria’s fight against Boko Haram. But that support comes with caveats: the Nigerian government must ensure that the upcoming elections will be fair and transparent. “Bottom line, we want to do more,” he said. “But our ability to do more will depend to some degree on the full measure of credibility, accountability, transparency, and peacefulness of this election.” But doing more won’t help if Nigeria’s current leadership, both miltary and civilian, don’t want to do more to help themselves. 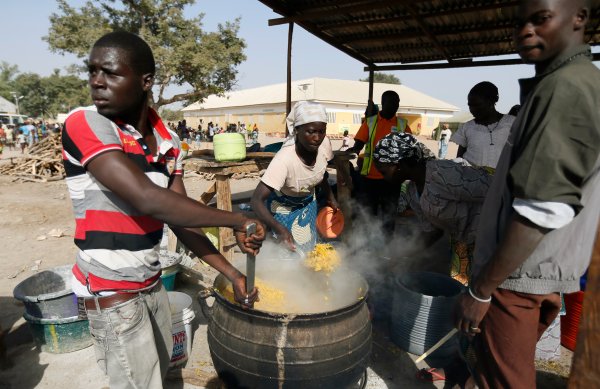