The Most Dangerous Ground in the Middle East

When Prime Minister Benjamin Netanyahu steps before a joint session of Congress, he will be entering what I have often called “the most dangerous ground in the Middle East.” It’s not the Golan Heights, or Gaza Strip, or Iran. It’s the constitutional no-man’s-land between the president and the Congress. In all of democracy it’s hard to think of a more dangerous minefield, one that can blow up on either the host and guest or the president — or all three of them.

Netanyahu certainly knows this. His speech March 3 will be his third before a joint meeting. The first two occasions had their downside as well as their up. In 1996, he was a newly elected, free-market-oriented premier, invited to the Hill by, in Newt Gingrich, a newly elevated, free-market-oriented Speaker. President Bill Clinton, whose most frequent foreign visitor at the White House was Yasser Arafat, was still trying to craft an agreement between Israel and the PLO.

The Israeli leader told of, among other things, how as a boy he knew Jerusalem as a divided city, rent by barbed wire. He used the word “dangerous” to describe any assumption that peace could be gained by re-dividing the city. It would never happen, he vowed. “Never,” he repeated, bringing the solons from both sides of the aisle to their feet in a thunderous ovation that could not have been lost on the administration that was hoping to divide the capital as part of a peace deal.

President Clinton, still mired in the soon-to-fail Oslo peace process, was apoplectic. His about-to-be state secretary, Madeleine Albright, loathed the Israeli leader. In the next Israeli general election, a raft of Clinton’s closest political strategists — Stanley Greenberg and James Carville among them — fetched up in the Jewish state to help one of Israel’s most decorated war heroes, Ehud Barak, defeat Netanyahu. Barak won the election, only to lose in 2001, after abrogating his promise not to dicker over dividing Jerusalem.

Ariel Sharon, who followed him, never addressed the Congress, which I always thought was a tragedy. No doubt he would have pulled out his maps — “meps,” is the way he pronounced the word — and lectured the solons on the order of battle. But Sharon did have his quarrels with the American president, George W. Bush, who felt Sharon had crossed a line when he declared that in the Middle East peace process, Israel would not play the role that had been assigned at Munich to Czechoslovakia.

What rescued them was a certain humility, the comprehension that the war that had been launched on 9/11 was bigger than both of them. So they let slide the bumps of public life. Soon after the Republicans gained control of the House in 2010, Congress promptly invited Netanyahu back for a second speech. It was an electrifying moment, made all the more so by the fact that Netanyahu and Obama were then quarreling over whether a settlement with the Palestinians should be done on the 1967 lines.

It was one of the most emotional speeches ever given to a joint session, though Churchill’s first was extraordinary, as was the address in 1986 of the new leader of the Philippines, Corazon Aquino (“Today I have returned — as the president of a free people”). Netanyahu dealt with the tensions with Obama by repeatedly praising him by name, and marking the bipartisan nature of the support Israel enjoys in America. His natural allies were Republicans, but he comprehended most Jews vote Democratic.

What makes Netanyahu’s third appearance before Congress so explosive is not that it somehow undercuts the president’s reception power — the power, as the Constitution puts it, “to receive ambassadors” — or lacks for standing to inform itself. Congress, after all, has its own duties in respect of foreign affairs. It is the branch granted the power to raise an army, provide a navy, declare war, grant letters of marque and reprisal, and regulate commerce with foreign nations.

What makes it so explosive is that the president fears a veto-proof vote on sanctions. Senator Robert Menendez, the Democrat who had been chairman the Foreign Relations, has been fighting heroically for a bill to ensure that, if Iran defaults on any nuclear arms pact, sanctions can be promptly restored, or even tightened. The negotiations were launched not just over the objections of Israel but also the doubts of Congress. It is now doing only what the president could have done to start with — listen to the democracy that Iran has declared would be its first target. 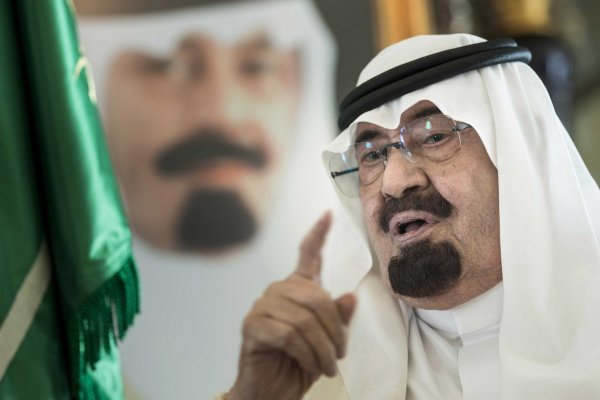 The Saudi Transition Looks Smooth—For Now
Next Up: Editor's Pick