Watch: The Warriors' Klay Thompson Had the Best Quarter of All Time

Until Friday night, the NBA record for most points scored in a period belonged to George “Iceman” Gervin, who dropped 33 for the San Antonio Spurs one night in April ’78 (he had a scoring title to clinch), and to Carmelo Anthony, who scored 33 for the Nuggets against Minnesota in December 2008. Gervin could shoot, and so could—can?—Anthony.

But neither has anything on the league’s reigning assassin, the Golden State Warriors’ Klay Thompson, who managed 37 points in a fiery third quarter against the sad-sack Sacramento Kings. (The Warriors, overall, had 41 points in the quarter.) Thompson went 13-for-13 from the field, including nine-of-nine from three-point range. He tied the record for most field goals in a quarter, and set a new record for most three-pointers. And he added in two free throws for good measure. SB Nation’s Seth Rosenthal has all the oohing and aching you’ll need, and Ray Ratto has the local color but for now behold this: With the win, the Warriors advanced to 35-6, five and a half games better than any comer the stellar West has to offer. They’re 9-1 in their last 10 and 20-1 at home. Good luck trying to catch them. 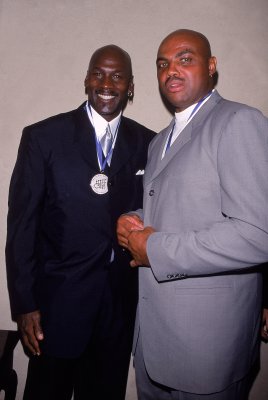 Here's Why Jordan And Barkley Are No Longer Friends
Next Up: Editor's Pick