Two Ebola Vaccines Are Heading to Trials in Liberia

Anthony Fauci, director of the National Institute of Allergy and Infectious Diseases, speaks during a House Energy and Commerce Committee subcommittee hearing on the U.S. public health response to the Ebola outbreak in Washington, D.C., Oct. 2014.
Andrew Harrer—Bloomberg/Getty Images
By Alexandra Sifferlin

The long-awaited vaccine for Ebola is heading to clinical trials in Liberia.

Two vaccines, with the National Institutes of Health’s (NIH) support, will start efficacy testing in Liberia in the beginning of February.

The NIH is launching the trial in collaboration with the Liberian Ministry of Health. The trial will test two vaccines against a placebo. People in Liberia who agree to participate in the trial will be split evenly into three groups. Two groups will test separate vaccines and the third group will be given a placebo. The trial will take place in Montserrado County, which includes the capital Monrovia, one of the country’s hardest-hit regions.

The vaccines have already undergone early safety trials at various sites in the U.S., Europe, and in parts of Africa. “There were no significant safety concerns and [the vaccine] induced the type of response that was quite comparable to the animal response of the monkeys,” says Dr. Anthony Fauci, director of the National Institute of Allergy and Infectious Diseases (NIAID). Prior trials in monkeys had shown the vaccine made the animals immune to the virus.

Initially the target date for the vaccine trial in West Africa had been end of January, but some logistics still need to be worked out. Fauci told TIME that he can say with almost certainty that the trials will indeed launch in early February. “There are a couple of minor issues that we are just ironing out with regard to the protocol with the FDA,” says Fauci. “Nothing that’s a show stopper.”

When the trial starts, the vaccines will initially be given to 600 people to collect additional data on the vaccine’s safety. If all goes well, the second part of the trial will launch with 27,000 people. 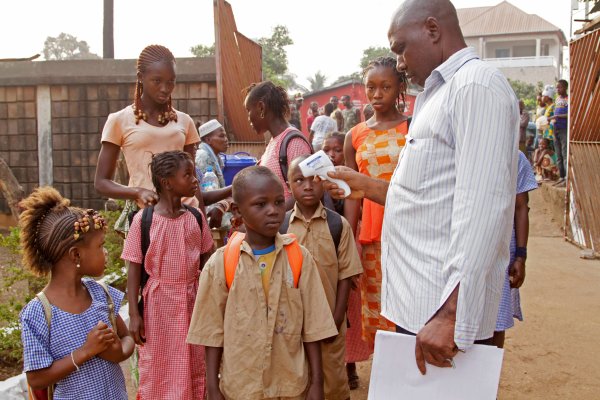 Number of Ebola Cases Dropping
Next Up: Editor's Pick