You Can Control This Heated Scarf With Your Smartphone

A scarf is probably not the first kind of “wearable device” you think of, but Microsoft may change that. A research group at the company has developed a smart scarf that can heat up or vibrate via a smartphone app, MIT Technology Review reports.

The scarf is comprised of hexagonal modules made of felt and overlaid with copper taffeta. One of the modules has Bluetooth functionality in order to communicate with your smartphone. Some of the modules heat up and others vibrate, but they can be rearranged in any order to alter the heat distribution of the scarf.

Researchers told the MIT Technology Review that they’d like to add cooling functionality to the scarf, as well as a music player. The device could even worth with other biometric devices to adjust the scarf temperature based on a person’s mood, perhaps boosting the heat when the wearer appears to be sad.

For now, the scarf is just a research project. A paper on the device was presented at a conference on human-computer interaction at Stanford University on Sunday. 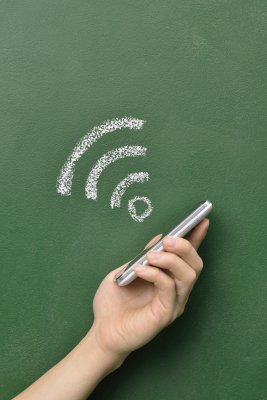 How To Boost Your Wi-Fi With a Range Extender
Next Up: Editor's Pick