Ten years ago, the death of a Saudi king would have sent shock waves through Washington. Today, as the Kingdom recovers from the death of King Abdullah yesterday, Saudis don’t carry the same clout. In part, that’s because the U.S. is much less dependent on Middle Eastern oil than it was a few years ago, as U.S. companies have reinvented the way oil and natural gas is produced. Hydraulic fracturing has opened access to liquid energy deposits locked inside once-impenetrable rock formations, and breakthroughs in horizontal drilling methods have made the technology more profitable.

By the end of this decade, the United States is expected to produce almost half the crude oil it consumes. More than 80% of its oil will come from North or South America. By 2020, the United States could become the world’s largest oil producer, and by 2035 the country could be almost entirely self-sufficient in energy. Relations with the Saudis are no longer a crucial feature of U.S. foreign policy, and the surge in global supply, which has helped force oil prices lower in recent months, ensures that others are less concerned with the Saudis as well.

In addition, outsiders are not worried that King Abdullah’s death will make the Kingdom unstable. Newly-crowned King Salman is plenty popular, and other key players—Crown Prince Muqrin, National Guard head Prince Miteab, and Interior Minister Mohammed bin Nayef—have pragmatic working relations with the new king and with one another. The succession process will appear uneventful from the outside, but Salman will spend the next several months consolidating his authority and building a stable balance of power among factions within the family and across the government.

Another reason the Saudis matter less: They’re now bogged down in the region. Saudi worries that Iran can make mischief even under harsh sanctions only raises fears should a deal be made with the West later this year over its nuclear program, which would ease those sanctions, Tehran would only become a more troublesome rival. But even if there is no deal and sanctions are tightened, Iran will probably become more aggressive to demonstrate its defiance, creating new headaches along Saudi borders.

How will the Saudis manage its local security worries? Along the border with violence-plagued Iraq, the Saudis are actually building a 600-mile wall complete with five layers of fencing, watch towers, night-vision cameras and radar. Terrorist violence in neighboring Yemen and the fall of its government this week add to the Saudi’s sense that their country is under siege. They’re building a wall along Yemen’ s border as well. Fights with ISIS and al-Qaeda in the Arabian Peninsula will demand attention and money.

King Salman is 79, and he’s been central to Saudi policymaking for 50 years. One day soon, we’ll see generational change in the Saudi leadership. When that happens, we might see a fresh approach to the Kingdom’s two biggest problems: Its inability to build a dynamic, modern economy to harness the energies of Saudi Arabia’s millions of young people and its growing marginalization as an international political and economic force.

That day has not yet come. 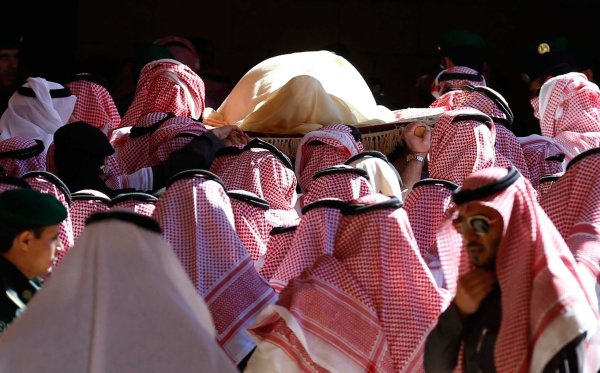 Saudi Arabia's Billionaire King to Be Buried in Unmarked Grave
Next Up: Editor's Pick