The Ebola Fight Has Reached a 'Turning Point' in West Africa, the WHO Says

A health care worker, right, takes the temperatures of school children for signs of the Ebola virus before they enter their school in the city of Conakry, Guinea, Monday, Jan. 19, 2015.
Youssouf Bah—AP
By Sabrina Toppa

The fight against Ebola has reached a “turning point,” according to the World Health Organization (WHO), as the three West African countries hit hardest by the deadly virus — Liberia, Guinea and Sierra Leone — see a precipitous drop in the number of new cases.

Liberia, which reported almost 9,000 cases since the deadly outbreak began in 2013, only detected eight new cases last week, reports the BBC. On some days, no new cases materialize at all, a heartening sign in a country where doctors once saw 509 new cases weekly at their peak.

“I would have identified the turning point as the beginning of the decline, first in Liberia and then later in Sierra Leone and Guinea,” Dr. Christopher Dye, the director of Ebola strategy for the WHO director general, told the BBC. “The incidence is pretty clearly going down in all three countries now.”

In Sierra Leona, where the health crisis once saw 748 cases flooding into hospitals each week, numbers are also stabilizing. The story is similar in Guinea, where the Ebola crisis reached a crescendo at 292 cases per week late last year.

Worldwide, Ebola has killed nearly 8,700 people and infected over 20,000 in one of the largest public health emergencies in recent memory.

Still, health officials at the WHO are exercising caution and warning that Ebola can reappear if risks are not properly mitigated. “Contact tracing,” or detecting everyone who ever came into contact with an Ebola-afflicted patient, is crucial to thwart future infection. Even one case cropping up can re-infect seemingly eradicated areas. 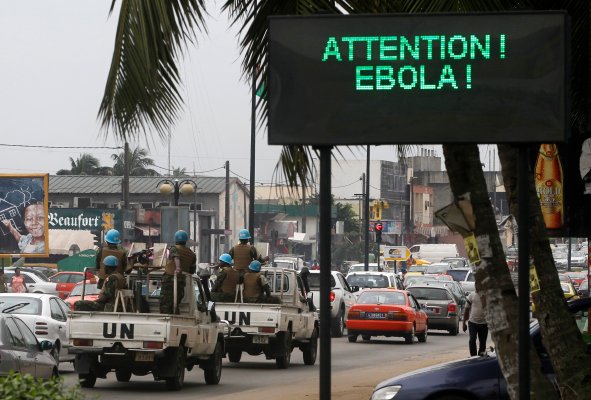 Guinean Priests Assaulted in Local Village
Next Up: Editor's Pick