It will take hundreds of millions of dollars to win the White House in 2016, and by that measure, Republican Mitt Romney is off to a rough start.

The 2012 Republican nominee is struggling to secure the financial backing even of the people who were his staunchest supporters.

The Center for Public Integrity in recent days attempted to contact roughly 90 top Romney fundraisers from his most recent presidential run, including every federal lobbyist who helped him raise $30,000 or more.

The vast majority willing to speak on the record say they haven’t decided whom to support in 2016. Almost all of these fundraisers said they’re wrestling with conflicting loyalties to Romney, former Florida Gov. Jeb Bush and other potential Republican hopefuls such as Sens. Marco Rubio and Lindsey Graham and Govs. Mike Pence, Scott Walker and Chris Christie.

If Romney hopes to win the nomination, he’ll have to work overtime to reconstitute the fundraising network that fueled his most recent White House bid and beat back potential competitors. Bush, in particular, is already trying to poach key Romney supporters who have the potential to raise, or “bundle,” millions of dollars for the candidate they ultimately decide to support.

To wit: Bush spent Tuesday afternoon courting some of Washington’s most powerful lobbyist-donors — including many top Romney 2012 fundraisers — around a dark-wood oval table in the bare-walled conference room at the offices of the National Association of Wholesaler-Distributors.

No food was served, but the presidency was on the table.

Bush provided fundraising-related material to those who wanted it. The material included fundraising tiers for his two recently formed political vehicles — a leadership political action committee and a super PAC. A person who was at the event said the top tier reached $500,000.

“Obviously, I’m biased, I’m supporting Gov. Bush, but I think if you were to talk to folks other than me that were in attendance they would say that he was impressive,” said Dirk Van Dongen, the president of the National Association of Wholesaler-Distributors, who organized the meetings.

Van Dongen, who raised more than $1.4 million for Romney’s campaign in 2012, said he is supporting Bush this time because of “a long-standing commitment.”

The meeting also provided Bush a chance to convince potential bundlers he could run a strong campaign. Multiple attendees say he did that, although several said they left the gathering still uncommitted.

At least one attendee said he was extremely impressed by Bush but added it’s difficult to raise large sums of money for someone who is not yet a declared candidate.

Bush spoke about his background in key national issues such as education and immigration reform and referred graciously to potential opponents, including Romney, while making the case that he could best connect with the electorate, according to two people who were there.

Bush and Romney met today in Utah, according to media reports. If one decides against running, it would free up supporters who are torn between them.

Representatives for Bush and Romney could not be reached for comment Thursday.

During the 2012 election cycle, Romney spent $104 million through the end of May, the period when he was working to clinch the nomination, according to the Center for Responsive Politics, which tracks campaign finance data.

Romney does have some committed backers.

“I’ve been a strong supporter since day one of Mitt’s efforts, and I have made it clear that I wouldn’t … commit to any other candidate until Mitt decided what he wanted to do for 2016,” said Mark Baker, a Montana lawyer who was Romney’s Montana finance chairman in both 2008 and 2012 and bundled nearly $500,000 for the 2012 campaign.

Baker said he’s heard from members of Romney’s “inner circle” about the possibility for another run and has been reaching out to other donors in an attempt to hold support steady.

“People have contacted me, and I’ve contacted others,” he said, adding that he hasn’t yet organized any events. “Generally, there’s a lot of support for Mitt. A lot of folks who were supportive in 2012 certainly feel that we would be in a much better place as a nation had Mitt been elected president. I think there’s a lot of excitement about the potential that that could happen in 2016.”

Another high-profile bundler, lobbyist Bill Simmons of Dutko Grayling, told USA Today he would back another Romney run. He raised nearly $1.3 million in 2012.

Many other former Romney supporters, however, aren’t on board — at least not yet.

In interviews this month with the Center for Public Integrity, several ticked off long personal histories with both Bush and Romney. A few confirmed they’ve committed to other potential presidential candidates. Others signaled they’re still deciding.

Randy Levine, the president of the New York Yankees, supported Romney is 2012 but is currently uncommitted.

Texas developer Harlan Crow, a major donor in 2012 to Restore Our Future, a pro-Romney super PAC, is also still on the sidelines.

Robert Grand, the Indianapolis-based managing partner of Barnes & Thornburg, raised more than $1 million for Romney during the 2012 cycle. He is also uncommitted, and confirmed in an email that he is waiting to see if Pence, the governor of Indiana, becomes a candidate.

Annie Presley, the national deputy finance director for George W. Bush’s 2000 presidential campaign, raised $53,000 for Romney during the 2012 cycle. She said she hasn’t heard from any candidates yet but likely will when they work their way around to her home state, Missouri. She is still uncommitted, and said she is impressed by both Bush and Romney.

“Either of them would make excellent presidents,” she said, but mused aloud about the possibility of a run by California businesswoman and former U.S. Senate candidate Carly Fiorina.

Van D. Hipp Jr., chairman of consulting firm American Defense International and a former chairman of the South Carolina Republican Party, said he thinks the array of choices “shows the strength of the Republican field.” He served on Romney’s finance team in 2012 but hasn’t committed to Romney in 2016.

“I’ve got several friends looking at it mighty strong. I think the world of Romney,” Hipp said, while noting his ties to other prospective candidates, including Bush, Ohio Gov. John Kasich and former New York Gov. George Pataki.

Add Graham, the U.S. senator from South Carolina, to Hipp’s mix, too.

“I’ve talked with some folks in South Carolina this past week who said they had gotten phone calls [from Graham] telling them, quote, to keep their powder dry,” he said. Hipp says he personally hasn’t yet heard from Graham, but added, “we go back a long ways and he’s a good friend of mine.”

Someone who has been in touch with Graham: David Wilkins, who leads the public policy and international law group at Nelson Mullins Riley & Scarborough.

Wilkins bundled $87,000 for Romney in 2012. He was the state chair of the Bush-Cheney campaign in 2004 and was an ambassador to Canada under President George W. Bush. “I have great admiration and respect for Gov. Bush, but until Lindsey makes a decision, a lot of us are — we’re for Lindsey Graham,” Wilkins said.

Despite modestly describing himself as “way down the totem pole” of fundraising, Wilkins acknowledged he’d heard from people representing multiple candidates, including Bush.

Christie, the New Jersey governor, has also scored former Romney fundraisers: billionaire Home Depot co-founder Kenneth Langone is one of them, according to news reports, as is Dallas investor Ray Washburne, who reportedly stepped down as finance chairman of the Republican National Committee to headline Christie’s bid.

’I want to hear everyone out’

Gaylord T. Hughey Jr., a prominent campaign cash bundler from Texas, said he has heard from and met with “several” potential presidential candidates or their representatives.

None have yet won his support.

Hughey explained he’s looking for a candidate with “integrity and vision and policy positions that a majority of the voters can agree with … electability is obviously there but you also have to have a man of character and vision and principle that can be elected. I want to hear everyone out before I commit my time and resources to supporting an individual candidate.”

Hughey bundled more than $350,000 for Romney’s 2012 campaign. He also raised money for Texas Gov. Rick Perry, another possible 2016 presidential candidate, when Perry ran for president during the 2012 election cycle. Furthermore, he raised more than $200,000 for Bush’s brother, former President George W. Bush, during his 2004 campaign.

Hughey has also contributed to Sen. Ted Cruz of Texas, who is also reportedly eyeing a presidential run.

Asked about the number of potential candidates with Texas ties, Hughey said, wryly: “They all have Texas ties to the degree they want to raise campaign funds.”

David Beightol, a lobbyist who attended the meeting with Bush, raised nearly $1.6 million for Romney’s 2012 campaign, the second-highest amount on the lobbyist bundler list.

“I’ve got a really difficult decision” between Romney and Bush, Beightol said.

Beightol said he has not yet heard from Romney’s team. As for Bush’s organization: “The work ethics and the team that he’s building is the most aggressive that I’ve ever seen at this stage.”

Others agreed the race was getting underway early.

“I don’t think any of these guys have gotten into serious fundraising yet,” said Ken Kies, a lobbyist with Federal Policy Group who raised nearly $73,000 for Romney. “They are at a relatively early stage. Having said that, I think things will pick up fairly soon.”

Former Kansas Gov. Bill Graves, now the president and CEO of the American Trucking Associations, said he, too, has deep ties to both Bush and Romney.

Graves raised nearly $1.8 million for Romney in 2012, the highest amount on the list of lobbyist bundlers disclosed by the campaign. He also met with Bush on Tuesday in Washington, D.C.

Graves said he has heard from both the Bush and Romney camps and is still uncommitted. 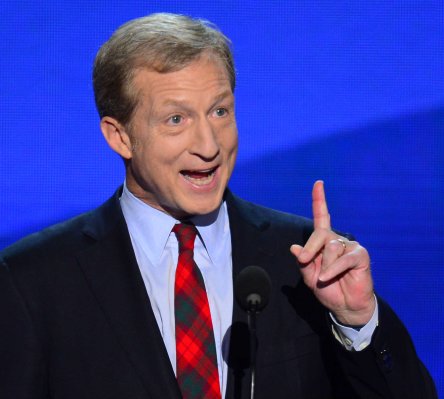