What to Know About the Science of E-Cigarettes

Elizabeth Renstrom for TIME
By Eliza Gray and Alexandra Sifferlin

Clearly there’s some disagreement among scientists about the risks and benefits of a product that’s growing in popularity. Here’s what you need to know about the latest science.

What’s with the latest disagreement?

Columbia public health professors Amy Fairchild and Ronald Bayer argue in Science magazine that the staunchest opponents of electronic cigarettes are so concerned about the potential downsides that they advocate for an anti-e-cigarette regulatory and research approach that may be bad for public health. This approach of “deep precaution,” they argue, “has served as a kind of trump argument, hostile to the notion of trade-offs, seeing in them perilous compromise. Such a posture does not serve either science or policy well.”

MORE The Future of Smoking

Given these two competing possibilities, the authors argued that the best formula for public health is to acknowledge the possibility for costs and benefits and to push for a regulatory scheme that is flexible enough to account for both outcomes. It is better to make public policy and execute scientific research under the assumption that e-cigarettes could bring good as well as bad.

Are there other reasons experts are concerned?

There’s also debate over the safety of the liquid nicotine inside e-cigarettes. In April 2014, the Centers for Disease Control and Prevention (CDC) released a report showing what they called a “dramatic” rise in e-cigarette-related calls to U.S. poison centers. Calls went from one a month in September 2010 to 215 calls a month in February 2014, and more than half of the calls involved children age five and under. Forty-two percent involved people age 20 and older. Symptoms of liquid nicotine ingestion are known to be vomiting, nausea and eye irritation.

Researchers are also wary of the long term effects of inhaling propylene glycol, one of the main ingredients in e-cigarettes. The jury is still out, but some physicians are concerned. “As for long-term effects, we don’t know what happens when you breathe the vapor into the lungs regularly,” Thomas Glynn, the director of science and trends at the American Cancer Society, told ABC News. “No one knows the answer to that.”

Are they really attracting young people?

Several recent—but fairly small—studies say yes. A December 2o14 study in the journal Pediatrics surveyed 1,941 Hawaii high school students and found that about 17% of the high schoolers smoked e-cigarettes only, 12% smoked both e-cigarettes and conventional cigarettes, and only 3% smoked conventional cigarettes. The findings suggested that kids who smoked e-cigarettes scored lower on outside risk factors to pick up a conventional smoking habit. “The fact that e-cigarette only users were intermediate in risk status between nonusers and dual users raises the possibility that e-cigarettes are recruiting medium-risk adolescents, who otherwise would be less susceptible to tobacco product use,” the authors wrote. Numbers released in 2013 from the National Youth Tobacco Survey showed that the percentage of middle school and high school students who have tried e-cigarettes doubled from 3.3% in 2011 to 6.8% in 2012.

What’s the argument in favor of e-cigarettes?

Some smokers use e-cigarettes to help them curb their traditional cigarette habit, or even quit. An August 2014 study that surveyed over 20,000 Americans showed that among adults who used a product to help them quit smoking, 57% chose e-cigarettes. That’s compared to the 39% who used prescription drugs like Chantix and the 39% who used other over-the-counter methods like patches or nicotine gum. Another study from July 2014, which reviewed 80 studies on e-cigarettes’ safety and their effects on users, revealed that not only can e-cigarettes help smokers quit, but they are less harmful to smokers and bystanders’ health compared to regular cigarettes.

What’s the FDA doing about it?

The U.S. Food and Drug Administration (FDA) only regulates e-cigarettes that are marketed for therapeutic purposes, though the agency has proposed a rule that would give it more regulatory power over e-cigarettes but that has not yet been implemented. The FDA has suggested a ban on sale of e-cigarettes to minors, and admits that there is a lot consumers don’t know about the product like whether they attract kids and teens or just how much nicotine is inhaled when a person vapes. 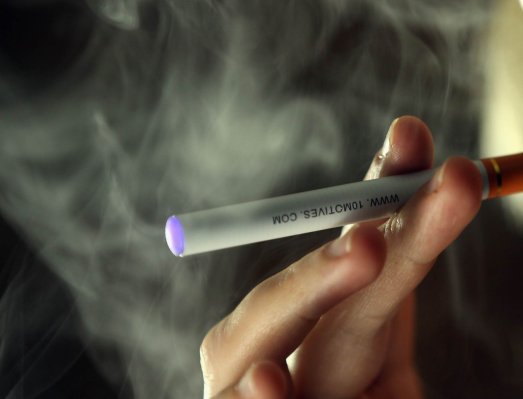