In one of her biggest hits, pop star Katy Perry sings, “I’m coming at you like a dark horse.” It’s a song she’s likely to perform Feb. 1 when she plays the Super Bowl in Glendale, Ariz. It’s also a fitting description of her booking. Perry, only six years removed from her breakout album, lacks the stature of past Super Bowl performers like Michael Jackson and Paul McCartney. Some among the massive audience for the game–which is typically the most watched TV event of the year by a wide margin–may not have heard of her at all.

That’s precisely the point. For Perry, who’s already played the Grammys and American Music Awards several times, the Super Bowl represents a major opportunity to find an even bigger audience. “There is no better thing, in terms of TV coverage, than to get booked on the halftime show,” says Keith Caulfield, the associate director of charts at the music-industry publication Billboard. “You have about 15 minutes of tens of millions of eyeballs on you.” And these viewers, unlike those who watch music-awards shows like the Grammys, are far more casual in their culture consumption. That makes them potential new fans. “A lot of those people,” says Caulfield, “haven’t been to any of your concerts, haven’t bought your albums, but may be interested in learning more about Katy Perry or Bruno Mars or Beyoncé.”

It’s not just the artists who win. For the NFL, which has moved from showcasing legacy acts to featuring contemporary artists, in a continued attempt to draw in women and families, Perry is the edgy, visually dynamic star who organizers hope can keep viewers from changing the channel while the New England Patriots and Seattle Seahawks are in the locker room. Forget the MTV Video Music Awards, the national anthem at a presidential Inauguration or a sold-out concert stint at Madison Square Garden–the Super Bowl is by any metric the biggest showcase for a music artist. From kickoff to Gatorade bath, there’s simply no show comparable; the 2014 game, despite its lopsided 43-8 final score, was watched by more Americans than any other television broadcast in history.

Those ratings are a testament to the NFL’s success in making the Super Bowl–also a platform for the year’s most imaginative and elaborate commercials–into an all-around entertainment event. This year, the league hopes the extravaganza will eclipse heated debate over commissioner Roger Goodell’s management and, specifically, his reaction to the Ray Rice abuse case. Last year’s game averaged a record 111.5 million viewers over the course of the broadcast. But viewership peaked, at 115.3 million, not during any memorable play but when Mars took the stage. There’s no other moment in which an entertainer comes as close to speaking to all of America at once.

Decades ago, an up-and-coming artist’s outdrawing the big game in viewership would have been unthinkable. In 1992, CBS’s Super Bowl broadcast featured a halftime tribute to the Winter Olympics, with Gloria Estefan and a coordinated dance routine to “Winter Wonderland.” Competitor Fox aired an episode of the sketch series In Living Color at the same time, drawing 22 million viewers–a huge swath of CBS’s potential audience. So in 1993, the NFL enlisted Michael Jackson to keep viewers from changing the channel between the second and third quarters. His performance, which featured a medley of classic hits as well as a children’s choir, demonstrated that contemporary pop was fair game in what had historically been a fairly staid broadcast.

By the early 2000s, MTV was contracted to produce spectacular mashups of contemporary artists–but that arrangement ended after Justin Timberlake infamously ripped off a piece of Janet Jackson’s bodice in 2004. The incident changed the shape of popular culture for nearly a decade, casting a shadow over Jackson’s career while ushering in a new era of playing it safe on live television. McCartney, in 2005, was one of the string of legacy acts booked before the league, surprisingly, got with the times. It invited the hip-hop group Black Eyed Peas for 2011, followed by Madonna, Beyoncé and Mars. “Eventually, there’s only so many legendary acts out there,” says Mark Quenzel, the NFL executive who oversees the league’s entertainment side. “And we’ve used most of them.”

From McCartney to Perry, the one thing that’s remained constant–and in fact grown with the rise of instant-gratification online music purchasing–is an immediate sales bump for the artists. After Mars’ performance, his most recent album, Unorthodox Jukebox, jumped 180% in sales compared with the previous week; Beyoncé’s 4 went up 123%. Sales of Madonna’s album catalog rose 410% after her 2012 set. Madonna, Mars and Beyoncé all embarked on tours after their performances. Beyoncé’s post-Bowl tour sold $212 million in tickets, while Madonna’s sold $305 million. Perry hopes to follow suit; she’ll be touring arenas in Europe in February and March.

Beyond the contribution to an artist’s coffers, though, is a patina of greater stardom. Given the Super Bowl’s nature as a moment to address a mass audience, stars tend to be both assertive and specific in their set choices. Consider that when she performed at the 2013 Super Bowl, Beyoncé was a very popular singer but not quite yet Beyoncé, ultra-powerful superstar. The sheer ambition of her performance, racing through the various eras of her career, cemented her in the public imagination as the perfect all-around entertainer–never mind that her most recent album was two years old and she showed no indication of releasing new material.

Similarly, Mars was a widely respected artist with a scant two albums to his name and a relatively low public profile before his high-energy performance vaulted him a level of fame or two. Madonna’s attempt to merge her back-catalog hits with newer material was less successful, not least because guest star M.I.A. stole the show with a flipped middle finger. But the motive was clear: Madonna was trying to assert her place at the center of the pop ecosystem, a goal her contemporary Prince had achieved brilliantly five years before. An artist intent on redefining herself, or simply defining herself, could hardly ask for a better opportunity.

But that definition comes with limits. The NFL discusses its standards with potential acts before any contract is signed. (The process of planning the 2016 show will begin in earnest, Quenzel says, about a month after Perry performs.) B. Akerlund, the stylist for Madonna’s halftime show, tweeted a picture of what had been the planned costumes for the show-closing performance of “Like a Prayer”; the visual effect of a crucifix across the robes apparently got nixed. “What the choir should have been … but the NFL wouldn’t have it,” Akerlund wrote. M.I.A. was sued by the NFL after her crude gesture was caught on camera; the rapper and the league eventually settled privately.

In an era when the pop-music audience is even more fractured than the television one, the league isn’t just making kings and queens of pop; it’s defining mores. For her part, Perry has said her costuming won’t push the envelope too far, calling her aesthetic “soft-serve sexiness. My intention is that everyone talks about the music and nothing else.”

But that may be a tough ask. The NFL’s booking practices came under new scrutiny in 2014, after it was reported that the league had asked Perry and two other acts to pay for the booking. Perry has never dispelled the notion that she was asked to pay but has said she did not. “I want to be invited on my own merits and not with some fine print,” she said this month. “I stuck to my position.” Quenzel calls the incident “misreported,” noting that artists are often asked to discuss ways to finance particularly extravagant performances: “We just want to make sure that everybody who benefits from it also understands there’s a cost associated with it, and there are limits to the cost.”

The Super Bowl could conceivably represent a comeback for Perry–transforming her from an artist who just endured a rough press cycle, with some slightly underperforming singles overshadowed by a purported feud with Taylor Swift, into her generation’s defining star. With that in mind, it’s unsurprising that some have been suspicious of just how neat it seems. Both monetarily and in a more diffuse sense, Perry is bound to profit from the Super Bowl performance.

But the relationship between the league and its star of the moment is a symbiotic one. Perry is in some ways the best-case scenario for a league that’s grown increasingly dependent on pop culture to package a controversial sport for women and families. Like the football tees marketed to women by Victoria’s Secret Pink or the growing number of concerts staged by the NFL throughout the season (Pharrell Williams and Ariana Grande performed at the 2014 season kickoff), Perry represents a new direction for a conversation that recently has focused on domestic violence and brain injuries. Given the inspirational tone of her music, she has said, “Maybe there is no better person” to reach female audiences. More generally, Perry–with the help of guest star Lenny Kravitz and a few surprises yet to be announced–is credible enough to pull together 12 minutes of hits but with enough on the line to make that 12 minutes as entertaining as possible.

She’ll have competition. Twenty-three years after Fox poached some of the NFL’s audience, YouTube is planning a live, streaming halftime show of its own, with cooking-show host Harley Morenstein. The history of comedy-show counterprogramming aside, it’s hard to imagine the NFL is too concerned: the appeal of pop music, expensive ads and (for some) championship football is a beleaguered league’s one undeniable asset. 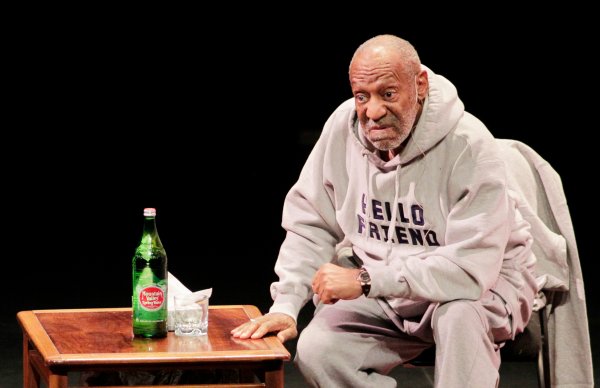 Refunds Asked for Cosby Shows
Next Up: Editor's Pick