U.S. Secretary of State John Kerry speaks to the press after a working lunch with E.U. High Representative Federica Mogherini at the U.S. Department of State in Washington on Jan. 21, 2015
Brendan Smialowski—AFP/Getty Images
By David Stout

U.S. Secretary of State John Kerry has condemned pro-Russian rebels battling the Ukrainian military for participating in a “landgrab” after occupying new territory in clear violation of a September peace accord.

After a brief lull in hostilities, fighting between forces loyal to Kiev and pro-Kremlin rebels spiked drastically this week along several fronts. Insurgents appear to be seizing larger swaths of land thanks to heavy weaponry and the alleged presence of Russian regular forces.

“This is a very blatant landgrab, and it is in direct contravention to the Minsk agreements which they signed up to,” Kerry told reporters in Washington on Wednesday.

The Minsk Protocol, which was signed by representatives from rebel militias along with Ukrainian and Russian officials, called for the orderly withdrawal of foreign fighters and heavy weaponry from the battlefields in southeastern Ukraine. However, the plan continues to be consistently ignored, resulting in the deaths of hundreds of combatants amid renewed fighting.

“For several months, we have seen the presence of Russian forces in eastern Ukraine. We are also seeing a substantial increase in the number of Russian heavy equipment in eastern Ukraine,” said Stoltenberg during a meeting with Norwegian Prime Minister Erna Solberg this week. “This does not contribute to a peaceful solution of the conflict.”

Following a meeting at the U.N. Security Council, U.S. Ambassador to the U.N. Samantha Power lambasted the Kremlin via Twitter for their alleged role in backing the separatists and denounced Russian President Vladimir Putin for overseeing an “occupation plan” rather than backing the peace accords.

During a speech at the World Economic Forum in Davos on Wednesday, Ukrainian President Petro Poroshenko accused Moscow of sending an estimated 9,000 troops across the border into his nation’s conflict-riven Donbas region.

“The country is facing the aggression not only regarding Crimea, but also regarding the significant part of Donetsk and Luhansk regions. About 9,000 Russian [troops] are in the territory of Ukraine,” Poroshenko told the assembled heads of state and economists.

However, Russia continues to deny that it is providing direct support to separatist fighters and balked at Washington’s efforts to contain the country through myriad sanctions.

“Only the people of Ukraine without any foreign interference must determine their future,” Russia Foreign Minister Sergei Lavrov said during a press conference in Moscow on Wednesday. “For its part, Russia will continue to assist the creation of favorable conditions to settle Ukraine’s formidable problems in this spirit.” 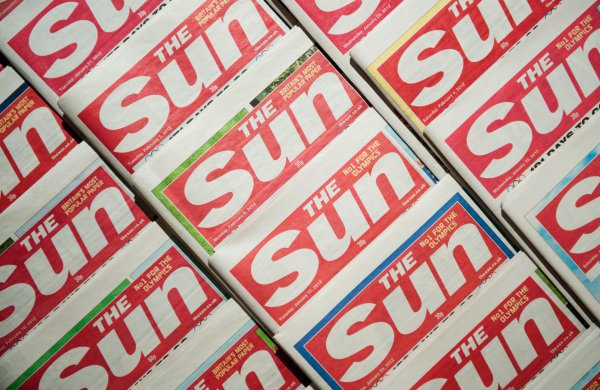 British Tabloid 'The Sun' Brings Back Topless Models
Next Up: Editor's Pick