A courtroom scene on Mar. 3, 1924, during the treason trial of Adolf Hitler and Erich Ludendorff (following the unsuccessful Beer Hall Putsch of November 1923
Hulton Archive / Getty Images
By Lily Rothman

Though Lady Edith was more concerned with the whereabouts of the missing Michael Gregson, history buffs may have caught something else in the news she received from Munich during the episode of Downton Abbey that aired in the U.S. on Jan. 25.

Viewers already knew that Michael had disappeared after being involved in a fight in Munich, shortly after moving to Germany in order to divorce his mentally ill wife so that he could marry Edith. Now, with a phone call from Michael’s office, more information is available: the gang who got into a fight with Michael was apparently a “group of thugs” who “wear brown shirts and go around bullying people,” as Lord Grantham phrases it. Their leader, who tried to start a revolution, is on trial, so more information about Michael’s fate may soon become available.

If you didn’t guess, that “absurd” man — as Edith puts it — is Adolf Hitler.

The trial she mentions took place in March of 1924, after the event sometimes referred to as the “Beer Hall Putsch.” For about a year before that, Hitler (along with General Erich von Ludendorff) had agitated for a fascist, monarchial revolution against the republican government that ran Germany at the time. Throughout 1923, the Hitlerites clashed with their many opponents throughout Germany, culminating in an attempted coup. Here’s how TIME described what happened, in the Nov. 19 issue of that year:

Though it seemed the next day that “Chancellor” Hitler was in control of the city, the revolt was soon crushed. Hitler was found hiding in a friend’s house a few days later and, after a trial in the spring of 1924, convicted of treason. But, though Lady Edith wouldn’t have known it then, that was not the last the world would see of him and his followers. “They’re a horrid bunch, from the sound of it,” Lord Grantham said — and history would prove him very, very right. 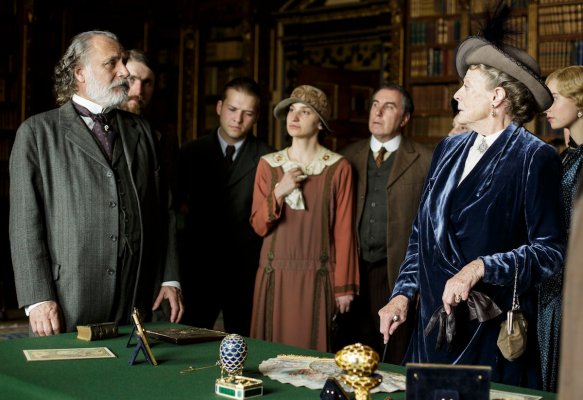 Where Did All Those Russians Come From on 'Downton'?
Next Up: Editor's Pick