Prime Minister Shinzo Abe has pledged to do all he can to secure the safe release of two Japanese citizens facing death threats at the hands of Islamist extremists in Syria. But experts say there’s little he can do — and he faces great risks in doing it.

Abe was winding up a six-day trip to the Middle East when militants from the Islamic State of Iraq and Greater Syria (ISIS) released a video Tuesday threatening to kill two Japanese men captured last year unless the government pays $200 million in ransom.

Militants said the demands were in retaliation for $200 million in aid that Abe had pledged just days earlier to countries opposing ISIS forces fighting in Syria and Iraq.

Abe likes to present himself as strong on defense, having taken office two years ago promising to boost military spending, ease long-standing restraints on Japan’s military and promote “proactive contributions to peace” overseas. Even before the Syria crisis, his administration was reportedly considering plans to beef up a Japanese anti-piracy base in Djibouti for rescue and other military missions in the Middle East region.

But polls show that Japanese remain deeply divided by Abe’s defense agenda. The hostage drama presents Abe with “a rather tricky balancing act,” says Koichi Nakano, a professor of political science at Sophia University in Tokyo.

“Abe needs to appear to be both tough on terrorist intimidation and deeply concerned about the plight of the hostages,” says Nakano. “If he appears soft and unable to cope with the pressure, he might start losing support. But if he appears uninterested in the lives of the Japanese hostages, he might also fall out of favor.”

Abe emphasized that his government would work to secure the hostages’ safety at a press conference late Tuesday in Jerusalem. “The international community needs to cooperate and take action without yielding to terrorism,” he said.

Even so, the crisis is certain to polarize the Japanese public. Polls show a majority remain deeply committed to Japan’s pacifist Constitution, despite a swing to the right by political leaders. Conservative rhetoric about patriotism is unlikely to sway them, says Nakano. “Their reaction is more likely to be that postwar pacifism provides a better means to protect the Japanese from such threats than Abe’s ‘pro-active’ approach.”

Perhaps ironically, Abe’s move towards a more robust defense agenda was inspired, in part, by a similar hostage crisis in the Middle East in January 2013 when ten Japanese nationals were killed by Islamist militants at a gas complex in Algeria.

In that crisis, Japan was forbidden by law from attempting a rescue operation, or even sending troops to escort survivors or bodies of the deceased out of the country. That rankled Abe – a staunch nationalist who had been in office less than a month — and almost certainly contributed to a more aggressive defense policy than he had signaled during his election campaign.

Since then, Abe has overseen three consecutive increases in annual defense spending – after 10 straight years of decline – and has unilaterally dropped a ban on collective self-defense.

He has also established a new National Security Council, which concentrates decision-making in the Prime Minister’s office, and has authorized Japan’s armed forces to form a new amphibious warfare unit to help defend Japan’s thousands of remote islands.

But for all that, Abe has precisely no military options in Syria, says Grant Newsham, senior research fellow at the Japan Forum for Strategic Studies, in Tokyo.

“Japan lacks the necessary forces for an overseas rescue. They aren’t organized or equipped or trained for such missions, even if they were ordered to undertake them. That requires a lot resources in terms of manpower, equipment, transportation and intelligence resources. It’s not that easy,” says Newsham, a former U.S. Marine Corps liaison to Japan’s Ground Self Defense Force.

Nakano says it is almost certain that Abe will not pay the ransom for the freelance journalist and self-styled mercenary who were captured separately by ISIS last year. With few options remaining and time running out, the odds of the prime minister being able to keep his pledge seem low indeed. 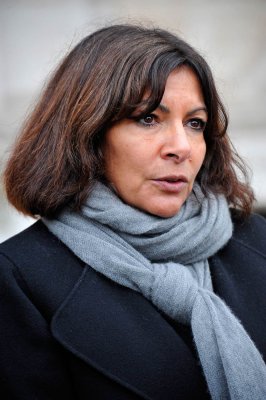 Paris Mayor to Sue Fox News
Next Up: Editor's Pick