The New Year’s resolution to join a gym is nothing new. The male citizens of classical Athens (sixth to fourth centuries BC) would have thronged the city’s three public gymnasia — the Akademia (Academy), Lykeion (Lyceum) and Kinosarges (Cynosarges) — around the new year. One cannot help but feel, however, that the ancient Greeks had things much better organised than we do. For one, the Athenian New Year began on the first new moon after the summer solstice, during the month of Hekatombaion (June/July), in midsummer, not midwinter. They did not go to the gym after the event to assuage their guilt about the excesses of the preceding festive season but beforehand in order to look their best for the forthcoming celebrations.

Of the three major festivals held during Hekatombaion, the most important was the Panathenaia, marking the birthday of Athena on the 28th with a pompe (procession), in which freeborn Athenians of both sexes progressed from the Dipylon Gate along the Panathenaic Way to the Agora and thence up through the Propylaia to the Altar of Athena on the Acropolis. Freeborn male citizens and their sons would have trained even more assiduously for the quadrennial Greater Panathenaia, which included a full programme of athletic events, with the added edge that they were expected to compete in the Panathenaic Stadium, gymnos, naked.

It is not just etymology that links the ancient gymnasion with its modern successor. Like today’s gym members, freeborn Athenian men and boys went to the city’s public gymnasia to perform aesthetic training, that is, exercises that enabled them to achieve or maintain the bodily ideal that was visibly glorified in the city’s public art. And for good reason: male nudity was no mere artistic convention in classical Athens, as it would be in neoclassical London, Paris or Berlin. It was obligatory during local and Pan-Hellenic competitions, such as the Panathenaic and Olympic Games and while training at the gymnasium. It was a common sight, too, during religious festivals. To cite one sculptural example, the western section of the Parthenon frieze (most of which is now in the British Museum) shows athletic young cavalrymen, naked except for a himation rakishly carried over one arm or thrown back over the shoulders, preparing to ride out in the Greater Panathenaic pompe.

Training for sporting competition (which would now be classed as complementary or assistance exercise) and for the narcissistic pursuit of the body beautiful (aesthetic training) are two functions shared by the ancient and modern institutions. To this we can add a third: therapeutic training, because the ancient Greeks, too, understood the value of exercise in maintaining health and curing disease. But there the similarities end. A visitor to a gym built between the closing decades of the 19th century and the present day would expect to walk into an indoor hall filled with equipment. In contrast, the visitor to a Greek gymnasion would have found something more akin to an open-air athletics field set within extensive parklands, devoid of any fixed equipment, though with the addition of altars and shrines.

The only major constructions would have been the palaistra, a large courtyard enclosed by porticos, and the xystoi, the covered running tracks for use in bad weather. Instead of performing on the parallel bars or ‘pumping iron’ on free weights in figure-hugging lycra, the patrons would be seen practising running, long jump, javelin, discus, wrestling and pankration, naked but oiled, covered with a coating of protective dust and with their genitals tied in place by a leather thong know as a kynodesme (literally a ‘dog leash’; a penis was a ‘dog’ in ancient Greek slang).

The rooms housed within the porticos of the palaistra reveal the functions that a gymnasion provided its patrons. Alongside the facilities that one would expect in an athletics facility — changing rooms (apodyterion), oiling, massage and medical room (aleipthrion), bath (loutron), punch-bag room (korykion) and ballgames room (sphairisterion) — there were rooms furnished with seating (exedrai) set aside for the education of boys from the ages of seven to 14; the epheboi, the city’s military cadets, who did two years’ military service from the ages of 18 to 20; and adult men who attended lectures given by sophists and philosophers. During the classical period, in addition to being a facility dedicated to the training of the body, the Akademia served as a primary and secondary school, a military academy and mess hall and an adult education institute. As the site of shrines and altars dedicated to heroes and gods, it would also have played its part in the religious life of the city.

Informally, the gymnasion was where boys had their first sexual experiences with other boys and older men. The erastes-eromenos system of age-graded same-sex relations that was part of the citizenship and military training of Greek boys and adolescents found a natural home within the confines of the all-male gymnasion. However, I would not like to give the reader the impression that the gymnasion was home to a culture of unbridled same-sex hedonism. Although Greek men and boys were accustomed to being naked in the gym, where they freely admired each others’ bodies, they also abided by strict rules of propriety and self-restraint. The gymnasion was where boys attained manhood in the broadest sense of the term and adult men pursued arete: their full physical, intellectual, emotional, social and moral potential. In The Laws, Plato discusses the concept of sophrosyne, the moderation of one’s desires in order to achieve full mastery of the self and true masculinity. He stresses the importance of physical training in the gym in its development and asserts that a man who is agymnastos (untrained physically, intellectually and morally) will not achieve sophrosyne and, by extension, arete. We can see in the New Year’s resolution to join a gym a modern echo of the ancient Greek pursuit of arete, as modern gym-goers strive to achieve their full human potential through the discipline of gym-based exercise.

Eric Chaline is the author of The Temple of Perfection: A History of the Gym, which will be published by Reaktion in March 2015 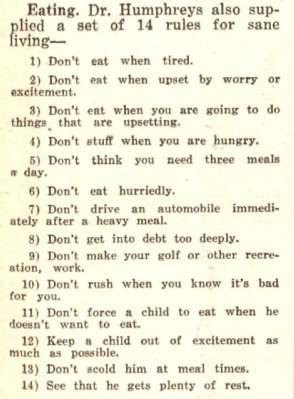 14 Timeless Rules to Keep You Sane
Next Up: Editor's Pick