50 Years Ago, the State of the Union Actually Meant Something

Fifty years ago today, 1.2 million Americans thronged to Washington to witness and participate in Lyndon Johnson’s second inauguration, which was the most elaborate in U.S. History. The extravaganza, featuring concerts, balls, banquets and receptions, was said to cost $1.5 million. No inauguration before that time–or thereafter until Barack Obama was inaugurated in 2009–had attracted so many people.

The speech he gave that day echoed the State of the Union address he had delivered 17 days earlier, in which he had called for congressional approval of a host of Great Society programs: large-scale federal aid, for the first time in U. S. history, for elementary and education; ambitious new medical programs for the elderly (Medicare) and for many low-income people (Medicaid); more funding for his War on Poverty, which Congress had approved in 1964; national support for the arts and the humanities; overhaul of the nation’s racist immigration laws; and many other domestic reforms. And, as Martin Luther King’s Southern Christian Leadership Conference was joining a struggle for voting rights in Selma, Ala., Johnson also promised to ask Congress for the elimination of “every remaining obstacle to the right to vote.”

It was, to say the least, an ambitious series of requests. But the scope of his demands is not what sets LBJ’s State of Union apart from the one President Obama will deliver on Tuesday, a half-century later. Obama’s speech is likely to be full of requests he’s already started to roll out—but Johnson’s speech included requests that, crucially, he actually expected the legislature to make happen. January of 1965 was perhaps the peak of U.S. liberal optimism, and the last year where a President might reasonably have expectations as high as Johnson’s. But how did we get from there to here?

The most obvious reason is that LBJ enjoyed huge congressional majorities in 1965 (295-140 in the House, and 68-32 in the Senate). No president since FDR in the early 1930s had such political advantages. Nor has any president since that time. But his backers were not limited to Congress. Indeed, popular expectations for liberal domestic reforms were stronger 50 years ago than they had been since the early 1930s. According to polls, 75% of Americans believed that they could “trust government to do the right thing most of the time.”

Underlying this extraordinary public confidence in January 1965 was an economy that had been booming since 1961. TIME, in an essay titled “Boom Without Bust,” rhapsodized, “economic policy has begun to liberate itself from the preoccupations of an earlier day and from the bitterness of class or partisan division that becloud rational discussion and hamper national action.”

Except for serious controversies over race—a big except, obviously—social harmony also seemed equally strong in January 1965. New York Times columnist James Reston foresaw an “Era of Good Feelings.” TIME, in a cover story titled “On the Fringe of a Golden Era,” celebrated the decline of generational tensions. “The classic conflict between parents and children,” it prophesized, “is letting up.”

The United States, moreover, was at peace in January 1965. The closest Johnson came in his inaugural to suggesting that the nation might go to war in Vietnam (which he did not mention) was one sentence: “If American lives must end, and American treasure be spilled, in countries that we barely know, that is the price that change has demanded of conviction and of our enduring covenant.”

Antiwar protesters were scattered and weak. The Students for a Democratic Society, which was soon to challenge LBJ’s military policies, claimed only 1,365 paid-up members at the time of its national convention in December 1964.

All that would soon change.

Within the next seven months, explosive racial confrontations, especially in the Watts area of Los Angeles that August, hastened the militancy of black civil rights leaders and the weakening of interracial strategies for change. These were also months of enormous military escalation of American troops in Vietnam. In January 1965, some 23,000 American “military advisers” were stationed there. By the end of year, which featured daily bombings of North Vietnam, 184,000 of our soldiers were fighting in Vietnam.

In these ways, the year 1965 featured unprecedented change. What we now think of as “The Sixties,” a time of extraordinary social turmoil and political polarization, had arrived. Liberalism, seemingly all-powerful in January, had fallen under siege. Ronald Reagan, who captured the governorship in California, led a Republican resurgence at the polls in 1966.

By that point, Johnson and his Democratic Congress had nonetheless achieved all his important domestic goals–notably a Voting Rights Act, federal aid to education, immigration reform, and establishment of Medicare and Medicaid. No congressional session in modern American history had managed to do more—and, since then, no presidential administration has dared to seek anything like the huge bundle of reforms that Congress enacted 50 years ago. On the contrary, conservatives threaten some of accomplishments of 1965, notably voting rights and immigration reform.

So it is that as President Obama delivers his own State of the Union address today, he will do so anticipating that many of his proposals will fall on deaf ears. A man who is well versed in recent American history, he can only dream that the extraordinary liberal mood of 1965 will some day return.

James T. Patterson is professor of history emeritus at Brown University, and author of The Eve of Destruction: How 1965 Transformed America (Basic Books, 2012, paper 2014).

Read TIME’s original 1965 reaction to Johnson’s State of the Union that year, here in the TIME Vault: A Modern Utopia 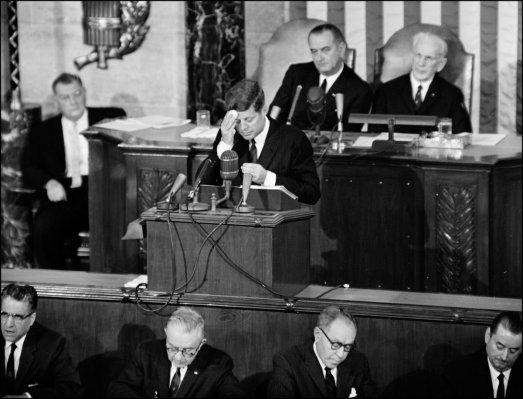 7 State of the Union Quotes That Sound Like Lines From Spider-Man
Next Up: Editor's Pick