Herself is a much-needed feminist tribute to both the minds and bodies of women, and there’s an abundance of nudity featured on the site — hardly a surprise given Stasey’s outspoken stance on female sexuality. In fact, naked women are the first things visitors of Herself.com see. Sure, the site’s thought-provoking interviews may get glossed over by viewers focusing on the subject’s naked bodies, but their overt nakedness is giving a different attitude about the female body the push forward it needs in mainstream media.

“A woman rarely gets the opportunity to just live in herself, as herself, a fully autonomous, self-determining human being. I wanted to give women the chance to reclaim that for themselves,” Stasey said in a recent interview. “The fact that it is a matter of controversy that a woman should choose to be nude without it being an act of sex just shows how backward and oppressive our society is. It shouldn’t matter. It shouldn’t warrant questioning.”

By overtly displaying the female form, Herself has the potential to expose its subjects to objectification, and the site’s garnered a mild amount of criticism on social media. But major publications such as Glamour and People are eager to praise Stasey’s uncensored tribute to women of all kinds.

Stasey encourages readers to “witness the female form in all its honesty without the burden of the male gaze.” The initial buzz surrounding Herself lead to the site trending on Facebook with the description “actress launches website for women featuring personal interviews and nude photos,” basically guaranteeing men will visit. Yet even allowing for the fact that she’s exposing herself to the male gaze, Stasey remains unfazed.

“I sincerely hope men come to the site and learn to see how women present themselves, how women look when they are not merely objects, but the living, breathing subjects of their own stories,” she says. “This is a site made by a woman for women about women,” Stasey adds.

Going full-frontal in the name of feminism isn’t without its controversies, but the women in Herself are showcasing their own bodies on their own terms. Not only that, but they’re reaching a new generation of teen readers thanks to the 24-year-old actress’ star role on the CW’s Reign. Ultimately Herself gives women the opportunity to decide whether they want their bodies showcased online — and no one should judge them for that.

“If [feminism] is anything less than a woman getting to live her life proudly and freely, then I probably wouldn’t march for it,” says Stasey. “If you think feminism is telling other women how to live, then we’ll never agree, and I’m fine with that. Our feminism is nothing less than freedom.”

Herself is about as safe as it gets for like-minded feminists wanting to share their beliefs, fears and hopes, as well as for Stasey’s teen fans who are just becoming aware of their bodies, sexuality and sexual identity. And for someone visiting the site for the nude pics? They’ll definitely learn something while they’re at it. 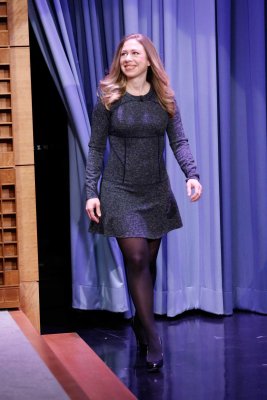 Chelsea Clinton: 'I'm So Happy Being a Mom'
Next Up: Editor's Pick