How Many People Will Watch the State of the Union?

U.S. President Barack Obama smiles as he arrives to deliver his State of the Union speech on Capitol Hill in Washington on January 28, 2014.
Larry Downing—Pool/Getty Images
By Maya Rhodan

Like much of network TV, the State of the Union is still important, but it now has a much smaller audience than it once did.

Over the past two decades, an average of 42.3 million people have tuned in to watch the President deliver his annual address on the nation’s status, with peaks and valleys depending on the most pressing issue of the moment. In 2003, a whopping 62.1 million Americans watched President George W. Bush make the case for going to war with Iraq during his late January address. President Obama’s first State of the Union address drew about 52.3 million viewers, according to Nielsen.

And yet, since 2012, the combined number of viewers hasn’t topped 40 million, despite the growing array of channels that host the speech both in English and Spanish. In 2014, President Obama’s speech had one of the smallest combined viewing audiences of the past two decades, with Nielsen reporting that 33.3 million people tuned in to watch.

When it comes to viewing audiences, in general, the State of the Union is no Super Bowl, which drew 111.4 million eyeballs in 2014. In fact, it’s more comparable (in terms of size of audience, of course) to a prime-time show like American Idol which could once draw millions of viewers but now struggles to keep people interested.

That’s not to say President Obama can’t draw a large viewing audience; 34 million people watched Obama’s primetime September speech on the role the U.S. will play in the effort to defeat the Islamic State of Iraq and Greater Syria–about the same number of people that tuned in to watch the Ohio State Buckeyes topple the Oregon Ducks in the College Football Championship game on Jan. 12.

What’s really noticeable given the drop in viewers, is the fact that the way the information is presented has changed drastically– and that the interaction audience members have with telecasts has changed, too. In 2014, the first year Nielsen recorded the social conversations surrounded the event, some 2.1 million tweets were sent out throughout the President’s State of the Union address that year. That’s comparable to the 2.6 million tweets that were sent out during last week’s Golden Globes, which also experienced a drop in viewership despite the boost in social activity.

And consider this: President Obama will also conduct interviews with three people with huge YouTube subscriber counts. Perhaps sometime soon the entire speech will be presented through a Reddit AMA. 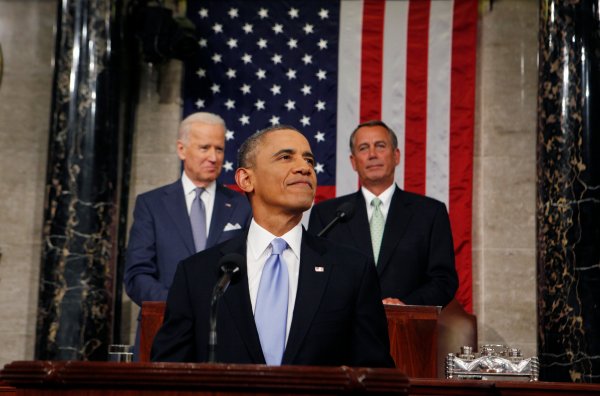 Watch 5 Years of Obama's SOTU Addresses in 90 Seconds
Next Up: Editor's Pick