It’s currently recommended that adults aged 51 and older consume less than 1,500 mg of sodium a day for better heart health. Since that’s less than one teaspoon of salt, it can be hard to achieve if fast or processed food is part of their diets. But now a new study shows that consuming up to 2,300 mg of salt isn’t associated with greater mortality, cardiovascular disease, or heart failure in older adults.

The study, published in the journal JAMA Internal Medicine, doesn’t refute Centers for Disease Control and Prevention (CDC) recommendations that older people should consume less than 1,500 mg of sodium a day, but it shows there also isn’t harm if people consume up to 2,300 mg (which is the CDC’s recommendation for the general population).

The authors note that a limitation of the study is that the amount of sodium consumed was self-reported, and people generally tend to underestimate their sodium consumption.

There did seem to be a greater risk for heart-related health problems among people who consumed more than 2,300 mg, but the numbers were not statistically significant.

The CDC recommendations offer a bit more leeway for people two and older who are supposed to consume 2,300 mg of sodium or less. But the American Heart Association has a 1,500 mg a day recommendation for all ages. Both recommendations have been disputed, with some experts arguing there’s a lack of evidence that people really need to be aiming for that little sodium, and that it’s a goal that most people cannot realistically meet.

“In older adults it’s probably ok if you stick with the general recommendations of one teaspoon (2,300 mg),” said study author Dr. Andreas P. Kalogeropoulos of Emory University. “If you reach 70 and are free of cardiovascular disease or heart failure, these people are probably going to do ok with the standard recommendations. But know that anything over one teaspoon is bad for your health.” 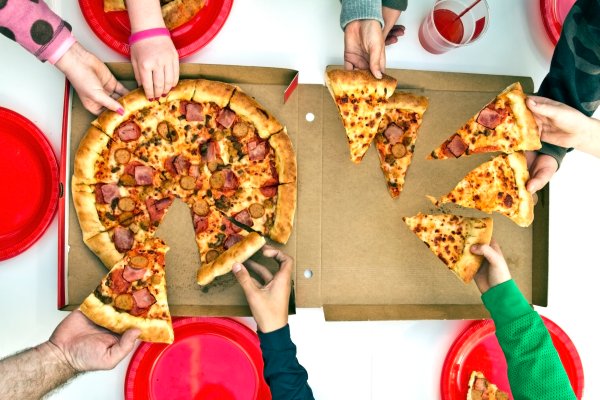 This Is the Scary Amount of Pizza Kids Are Really Eating
Next Up: Editor's Pick