American Sniper was expected to do well this weekend after an impressive limited release, but not this well: The Clint Eastwood-directed war film took in an estimated $90.2 million—and broke a few records.

The Oscar-nominated film set a new record for a January opening by taking in $30.5 million on Friday, breaking the mark set by Cloverfield ($17.2 million on Jan. 18, 2008). January is a notoriously slow month at the box office, so Sniper‘s debut is particularly eye-opening.

American Sniper also took a couple records from James Cameron’s Avatar, which previously held the records for biggest January weekend performance (it made $68.5 million the first weekend of 2010) and biggest gross for a single day ($28.5 million) in January. This is big for Sniper, especially given the sluggish starts for Clint Eastwood films lately: His last two films, 2014’s Jersey Boys and 2011’s J. Edgar, opened with just $13.3 million and $11.2 million, respectively.

American Sniper‘s wide release came on the heels of its success at Thursday’s Oscar announcement: The film was nominated for six Academy Awards, including one for Best Picture. This announcement perfectly coincided with Sniper‘s Friday wide release, giving viewers who were previously on the fence about the movie—or just didn’t know about the movie—a reason to head to the theater.

As for the rest of the top five, the Kevin Hart-led Wedding Ringer took the number two spot with $21 million. This is nearly half of what Ride Along, Hart’s comedy that opened at this exact time last year, made its opening weekend, but it’s to be expected: The Wedding Ringer had to play against multiple new films with much more buzz, so the fact that it grossed a bit over $20 million—and is well on its way to breaking even with its $23 million budget—is in itself a success.

Family-friendly Paddington also did predictably well with $19.3 million, a number definitely helped by those with kids looking for a PG alternative to the darker or raunchier films currently in theaters. One of those darker films is Taken 3, which wasnumber one last weekend but dropped down to the number four spot this time around with $14.1 million, 64 percent less than its $39.2 million opening.

Selma, also a Best Picture nominee, rounded out the top five with $8.3 million. This is a 26 percent decrease from last weekend’s $11.3 million, but it should experience a boost in ticket sales Monday when it’s expected viewers will head to the cinema to check out the Martin Luther King, Jr. biopic in celebration of the Civil Rights leader’s birthday.

Outside the top five, newcomer Blackhat just barely made the top 10 with a $4 million opening weekend. The cyber thriller, starring Chris Hemsworth and directed by Michael Mann, has been plagued with less-than-stellar reviews—it currently has a 32 percent on Rotten Tomatoes—that likely contributed to its relatively weak performance. 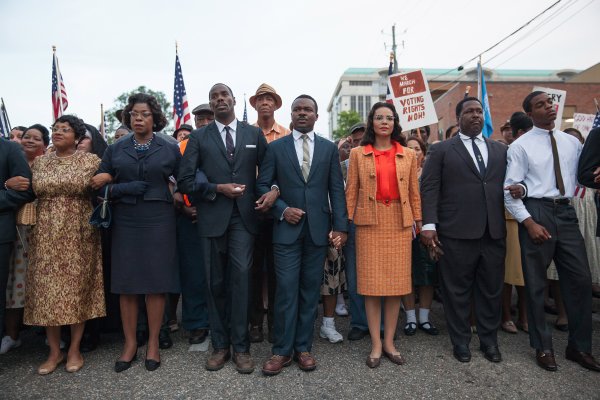 President Obama Hosted a Private Screening With the Cast of Selma
Next Up: Editor's Pick